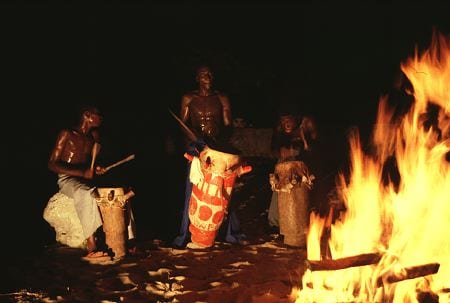 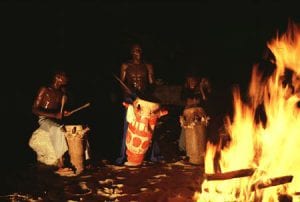 When people hear the word voodoo, they often envision dolls stuck with pins, zombies, and hideous rituals carried out in darkness. But voodoo is simply a belief system. Voodoo was first brought to Haitiby African slaves sometime during the sixteenth century. It emerged in Louisiana two hundred years later.

Voodoo involves the interaction of humans with spirits. Legba, the spirit in charge, serves as a mediator between human beings and the spirit world. Other loa, or high gods, include Damballah, a snake god imbued with virility; Guede, goddess of love; and her darker sisters, jealousy and vengeance. Many lesser gods and innumerable spirits play parts in voodoo’s elaborate rituals and spells.

In a traditional voodoo ceremony, worshipers work themselves into a frenzy through music, chanting, and dancing, sometimes accompanied by various forms of drugs and alcohol. During an altered state of consciousness, worshipers become possessed by one of the spirits and collapse to the ground, writhing and speaking unintelligibly. Once possessed, a worshipper is believed to be able to bring about a cure, good fortune, or some other human desire. During a typical ceremony, animal sacrifices are offered to the loa to win their favor.

François “Papa Doc” Duvalier, the dictator who ruled Haiti with an iron fist for many decades, is believed to have been a houngan — a voodoo priest — who capitalized on the local superstitions to maintain control over his little kingdom. He called his secret police the tontons macoute, which means “itinerant magicians,” and the license plate on his car was said to consist of magical numbers.

The dark side of voodoo, however, is what has captured the collective imagination. The extremes of voodoo’s black magic can include control over others, ritual murders, and cannibalism. Some practitioners curse the recent dead and turn them into zombies, reanimated corpses who are slaves without wills of their own.

Voodoo has over 50 million followers worldwide. Voodoo is a word of dahometer origin meaning spirit or god. Voodoo is a system of beliefs and rights of African origin. This popular religion, which miles pagan rites and beliefs with catholic practises, has sad to say long stood in bad repute. In Brazil and Cuba, where voodoo flourishes under the names of candomble – macymba – chango – santeria or naniguismo, has millions of followers. Types of voodoo also flourish in Trinidad and Jamaica and even New Orleans, where black and white magic is still called Hoodoo.

Voodoo Dancing is intimately linked with voodoo worship and indeed takes so prominent a place in it that voodoo might almost be defined as a dance religion. The drums beating out dance to some extent become the very symbols of voodoo. The drummer is the life and soul of every ceremony. Drummers play their music all through the night with a fierce passion which is occasionally frenzied. For voodoo worshipers a drum is more than a sacred instrument, it is the vessel of a deity. Drums are worshipped and marks of respect are shown upon them. The drum beats govern the steps and movements of the dancers. They also invoke numerous families of Voodoo gods since dancing is a ritualistic act. Music and dancing please the gods because the gods too are dancers. The dancers revolve around the poteau-mitan, each one making up their own steps. Songs are used as accompaniments to dancers.

Voodoo Drawings: Since spirits manifest themselves through people, no statues or pictures are needed. Use is made during ceremonies of symbolic drawings, called veve. Depending on the spirit, these designs are drawn on the ground with wheat, maize flour, crushed birch, coffee grounds or ash. The priest takes a pinch of powder from a bowl and outlines geometric figures, objects or animals.

Certain veve, composed of the symbols of gods extend the full length of the peristyle. It is on these drawings that offerings and the bodies of sacrificed animals are placed. They also possess the magic power of attracting the spirits.

New Orleans Voodoo arrived with the slaves from the Caribbean. Later, more slaves arrived from Africa and Haiti bringing with them more Voodoo. The first official reference to Voodoo WAS in 1782. Over time, many of these slaves were forced into the catholic church, and as such eventually started to use catholic icons in the Voodoo hierarchy. Voodoo in New Orleans became so prominent that it became a major part of the way of life. Till this day, New Orleans Voodoo is still a powerful force on the culture of New Orleans.

The classic form of sorcery with a Voodoo doll symbolizing the victim in Haiti is well known. Another form used by the sorcerer, by means of incantation, is to lure the soul of the person into a bucket of water. When he sees the image of his victim reflected into the water, he stabs it. If successful the water immediately reddens. A person may also be killed if if certain rites are carried out on objects which have belonged to the victim. Whoever casts a spell on an enemy runs the risk of having his secret discovered by a hungan, who in response to demands from the victims family, will not hesitate to pay back in full to the person who cast the voodoo spell.

In Voodoo Spells the “cure-all” was very popular amongst followers of Voodoo. The “cure all” was a voodoo spell that could solve all problems. There were different recipes in Voodoo Spells for “cure all”, one recipe was to mix jimpson weed with sulphur and honey. Placed in a glass, rubbed against a black cat, and then slowly sipped. To keep your partner faithful in Voodoo Spells, just write the name of the partner on a slip of paper and place in the chimney of your home. Prayer upon the note. In New Orleans Voodoo, the most popular Voodoo Spell was “gris-gris”. To stop a voodoo spell being placed upon you, acquire some bristles from a pig cooked at a Voodoo ritual, tie the bristles into a bundle and carry them on you at all times.

Voodoo worshipers are divided into groups centered around a temple (houmfo). This belongs to a priest (houngan) or priestess who directs the ceremonies and serves as intermediary between the believers and the supernatural powers. The priests are attended by hounsi (servants of the gods) who assist them in their offices. Hounsi are chosen from amongst the kanzo, those who have been fully initiated.