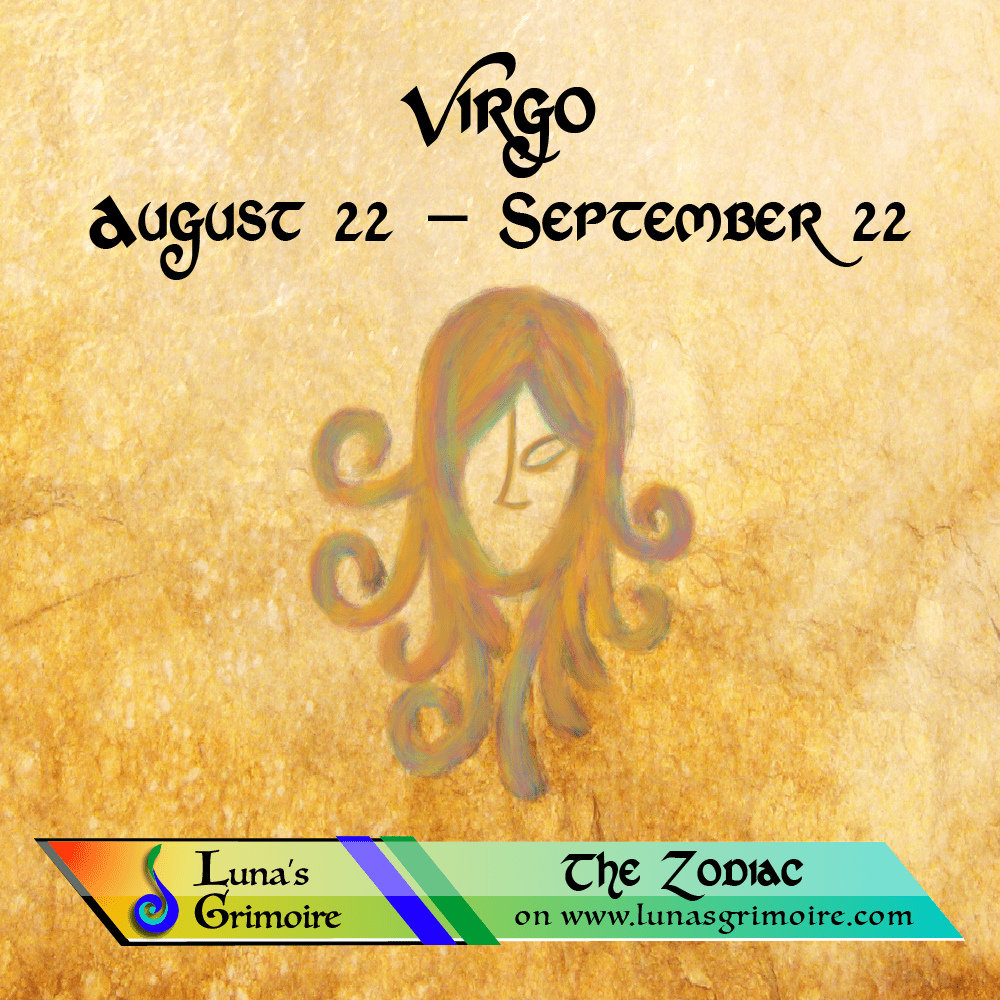 Virgo is the only zodiac sign represented by a female. It is sometimes thought of as a potentially creative girl, delicately lovely; sometimes as a somewhat older woman, intelligent but rather pedantic and spinsterish. The latter impression is sometimes confirmed by the Virgoan preciseness, refinement, fastidious love of cleanliness, hygiene and good order, conventionality and aristocratic attitude of reserve. They are usually observant, shrewd, critically inclined, judicious, patient, practical supporters of the status quo, and tend toward conservatism in all departments of life. On the surface they are emotionally cold, and sometimes this goes deeper, for their habit of suppressing their natural kindness may in the end cause it to atrophy, with the result that they shrink from committing themselves to friendship, make few relationships, and those they do make they are careful to keep superficial.

But the outward lack of feeling may, in some individuals born under this sign, conceal too much emotion, to which they are afraid of giving way because they do not trust others, nor do they have confidence in themselves and their judgments. This is because they are conscious of certain shortcomings in themselves of worldliness, of practicality, of sophistication and of outgoingness. So they bring the art of self concealment to a high pitch, hiding their apprehensiveness about themselves and their often considerable sympathy with other people under a mantle of matter-of-factness and undemonstrative, quiet reserve. They are still waters that run deep. Yet in their unassuming, outwardly cheerful and agreeable fashion, they can be sensible, discreet, well spoken, wise and witty, with a good understanding of other people’s problems which they can tackle with a practicality not always evident in their own personal relationships.

Both sexes have considerable charm and dignity, which make some male Virgoans appear effeminate when they are not. In marriage they can be genuinely affectionate, making good spouses and parents, but their love making is a perfection of technique rather than the expression of desire, and they must be careful not to mate with a partner whose sex drive requires a passion they cannot match.

They are intellectually enquiring, methodical and logical, studious and teachable. They combine mental ingenuity with the ability to produce a clear analysis of the most complicated problems. They have an excellent eye for detail but they may be so meticulous that they neglect larger issues. Also, although they are realists, they may slow down projects by being too exact.

They are practical with their hands, good technicians and have genuine inventive talents, Thoroughness, hard work and conscientiousness are their hallmarks, and they are such perfectionists that, if things go wrong, they are easily discouraged. Because of their ability to see every angle of a many-sided question, they are unhappy with abstract theorizing. Appreciating the many different points of view as they do, they find philosophical concepts difficult, and they vacillate and have no confidence in any conclusions at which they arrive.

With these qualities, they are better as subordinates than leaders. Responsibility irks them and they often lack the breadth of strategic vision that a leader needs Virgoans are essentially tacticians, admirable in the attainment of limited objectives. Their self distrust is something they project on to other people and tends to make them exacting employers, though in the demands they make on those under them they temper this attitude with justice. They have potential abilities in the arts, sciences and languages. Language especially they use correctly, clearly, consciously and formally, as grammarians and etymologists rather than for literary interests, yet they are likely to have a good memory for apt quotations. Although they are well suited for careers in machine drawing, surveying and similar occupations, they are better fitted for a job in a library or office than a workshop.

Their minds are such that they need the stimulus of practical problems to be solved rather than the mere routine or working to set specifications that need no thought. They are careful with money and their interest in statistics makes them excellent bookkeepers and accountants. They also make good editors, physicists and analytical chemists. They may also find success as welfare workers, ministering to those less fortunate than themselves. They can be doctors, nurses, psychologists, teachers, confidential secretaries, technologists, inspectors, musicians, critics, public speakers and writers especially of reference works such as dictionaries and encyclopedias. Both sexes have a deep interest in history, a feature recognized by astrological authorities for at least two hundred years. If they go in for a business career their shrewdness and analytical ingenuity could tempt them into dishonesty, though they usually have enough moral sense to resist temptation. Female Virgoans may find a career in fashion, for they have a flair for dress, in which they can be trend setters. In any profession they choose the natives of this sign readily assimilate new ideas, but always with caution, conserving what they consider worth keeping from the past. They love country life but are unlikely to make good farmers, unless they can contrive to carry out their work without outraging their sense of hygiene and cleanliness.

Their faults, as is usual with all zodiacal types, are the extremes of their virtues. Fastidious reticence and modesty become old-maidishness and persnicketiness; balanced criticism becomes carping and nagging; and concern for detail becomes overspecialization. Virgoans are liable to indecision in wider issues and this can become chronic, turning molehills of minor difficulties into Himalayas of crisis. Their prudence can become guile and their carefulness, turned in on themselves, can produce worriers and hypochondriacs.

Virgo is said to govern the hands, abdomen, intestines, spleen and central nervous system. Illnesses to which its natives are prone include catarrh, cold, coughs, pleurisies, pneumonia and nervous instabilities. Their natures make them inclined to worry and this makes them vulnerable to stomach and bowel troubles, including colic and ulcers. Male Virgoans may have trouble with their sexual organs. Both sexes are strongly interested in drugs and esoteric cuisine and as their delicate stomachs require them to be careful about their diet, it is essential that they treat their fascination with exotic food with extreme care.

Your starstone is the beautiful, SARDONYX. The Sardonyx can be found with many different colored bands on it but the one suggested for Virgo is that of the reddish brown variety. It is in the quartz family and is mined around the world.