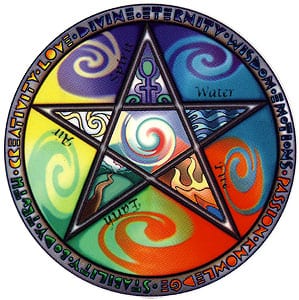 Hear now the words of the witches,
The secrets we hid in the night,
When dark was our destiny’s pathway,
That now we bring into light.

Mysterious water and fire,
The earth and the wide-ranging air,
By hidden quintessence we know them
And will and keep silent and dare.

The birth and rebirth of all nature,
The passing of winter and spring.
We share with life universal,
Rejoice in the magical ring.

Four times in the year the Great Sabbat
Returns, and witches are seen
At Lammas and Candlemass dancing,
On May Eve and old Halloween.

When day-time and night-time are equal,
When sun is at greatest and least,
The four Lesser Sabbats are summoned,
And Witches gather in feast.

Thirteen silver moons in a year are,
Thirteen is the coven’s array.
Thirteen times at Esbat make merry,
For each golden year and a day.

The power that was passed down the age,
Each time between woman and man,
Each century unto the other,
Ere time and the ages began.

When drawn is the magical circle,
Be sword or athame of power, I
ts compass between two worlds lies,
In land of the shades for that hour.

This world has no right then to knowit,
And world of beyond will tell naught,
The oldest of Gods are invoked there,
The Great Work of Magic is wrought.

For the two are mystical pillars,
That stand at the gate of the shrine,
And two are the powers of nature,
The forms and the focus devine.

The dark and the light in succession,
The opposites each unto each,
Shown forth as a God and a Goddess:
Of this our ancestors teach.

By night he’s the wild wind’s rider,
The Horn’d One, the Lord of the Shades,
By day he’s King of the Woodland,
The dweller in green forest glades.

She is youthful or old as she pleases,
She sails the torn clouds in her barque,
The bright silver lady of moonlight,
The Crone who weaves spells in the dark.

The Master and Mistress of magic,
That dwell in the deeps of the mind,
Immortal and ever renewing,
With powers to free or to bind.

So drink the good wine to the Old Gods,
And dance and make love in their praise,
Till Elphame’s fair land shall receive us,
In peace at the end of our days.

And Do What You Will be the challenge,
So be it Love that harms none,
For this is the only commandment,
By magic of old, be it done!