The Skunk in the Garage 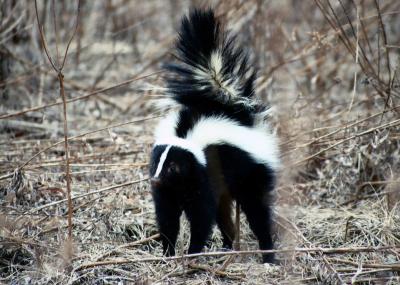 Today, I was talking to my disability claim managers. I was trying to get everything sorted out so that they could put my application through. I had sent them my packet with all of my information, so they had called me to confirm that they would call me again in a few days to ask me some questions.

All of a sudden, all of my dogs outside started going wild. The dogs were barking, both inside and out. I felt something was wrong, so as soon as I got off the phone, I wandered outside to check it out. My dog was at the edge of the garage, barking and foaming at the mouth. Yin turned around to glance at me, came to the fence and then turned right back around to the garage to start barking.

I knew that reaction, she was telling me something was in there. I was worried, because one of our older dogs stayed in that garage. I didn’t know if something had happened to her and Yin was trying to tell me. But as I looked in the garage, I was shocked to see this little black and white fellow, tail up and looking out at the dogs that were baking at it.

Oh gods, I thought. There was a skunk trapped in the garage. I quickly ushered my dogs back, not wanting them to get sprayed any more than they had. That explained the foaming, she’d been sprayed. So I grabbed them both by the scruff and pushed them into a dog run, that way they wouldn’t bother the guy. I noticed an injury to the skunks head, so I took a bit of a closer look.

He wasn’t being aggressive, quite the contrary, once the dogs were out of his way, he went about his business. He sniffed around the garage, scratched at the hay we had laid out on the floor. Tried to get under the blanket we kept in there. He was acting like a very normal skunk. Okay, I thought, I don’t think he’s rabid. He’s not biting at random objects or rubbing at his head. He hasn’t attacked me and he hasn’t attacked my dogs yet.

I had my cellphone with me, so I started calling different numbers. The police was my first instinct, asking if they could forward me to any places that might be able to trap the skunk and relocate it somewhere else besides my garage. “Sorry ma’am, there aren’t any places open right now. It’s Good Friday. And we don’t do those kinds of things. But you can do what you need to do.” Thanks for nothing, you just gave me permission to shoot it.

Next reaction, try to find a Wildlife Rehab center. Maybe they know an individual that can help me. So, I called up Miigizi and Nibo and asked them if they could look one up for me and send me the number. I couldn’t get a hold of the rehab center, either. Well, so much for that plan. I start thinking of things that I can do, still watching the little skunk as he worked his way around the garage.

There were some stuffed animals laying around, and I watched him as he tried to mount and mate with one of them. That was a good laugh, but gave me a clue as to why this little skunk was mucking about in my garage. It was a male, looking for a mate. From my knowledge of animals, I knew that skunks were mighty territorial. So that was about my cue to start leaving the garage and leave the little sucker alone. Maybe he’d work his way out on his own and get the hell away from my home and my animals.

As I started out, I guess he noticed me. He charged me, tried to bite my feet. I jumped out, screaming and cursing the whole way. He wondered back in the garage for a bit, so I started trying to make my way out. He came back out, sniffing about… Noticed me again. Started chasing after me. That was about the time I said “Screw this!” and started for my dogs pen. I made my way inside with Yang, Yin’s brother. I had the idea, dog and skunk, maybe he’ll leave me alone. Not the case.

Skunk tried to come after me through the squares of my dogs fencing and about the time he made it halfway through was about the time that Yang’s jaws clamped down on the little guy, just behind it’s head. Yang yanked it the rest of the way through and chomped. I watched it go limp, then Yang shook his head. Managing to get sprayed and me in the process. Damn dog.

He left it laying limp in the grass and came over to me. Sprayed or not, I gave him a great big, giant hug. Because whether or not that skunk was rabid, I didn’t care. I didn’t want to get bit… And I sure as hell didn’t want a rabies shot with a giant needle in my stomach. My dog saved me one hell of a painful trip to the hospital!

As sad as I was for the little skunk, as much as I wanted to save it… I knew there was nothing else for me to do at that point. I left, long enough to walk inside and go get my shotgun. Yang watched it the whole time, making sure it didn’t leave that spot. When I came back, I cocked the shotgun and fired a shot. I wanted to make sure that it didn’t suffer any more… Because with a broken back, there was no way for it to be rehabilitated.

I know this is a very sad story for those animal lovers out there, and perhaps a little graphic, but I did the best that I could. With adrenaline pumping and a skunk chasing after me, with no way of really knowing if it were rabid… I’m kind of glad that I had a protector on my side, willing to bite the bullet for me. I couldn’t have asked for a better dog.

For those of you concerned about my dogs, I checked them all over thoroughly. There are no bites or scratches on any of them and I keep them updated on their shots. So there are no concerns for rabies infecting any of them, I hope. I’ll be watching them all very closely for the next ten days, as that is the isolation period.

Until then, we’re all getting a tomato bath, because we all smell like skunk. It’s a rather sickening smell… And any of you that have been around a skunk, have been sprayed, or driven near one on the road… I’m sure you completely understand my pain. It’s enough to make you throw up, especially when the smell is on you.

But with that, I’m out. The pleasures of living a country life… There you have it!