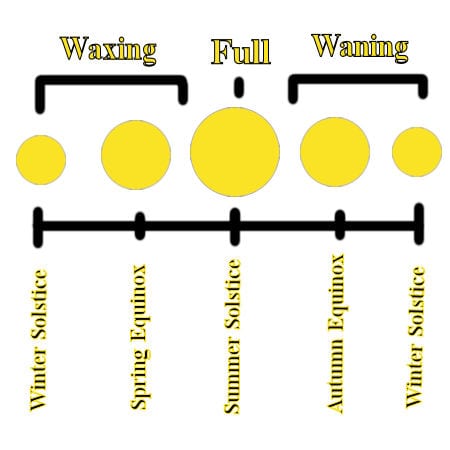 The difference is the lunar cycles operate on a monthly cycle while the solar operates on a yearly cycle.

The Sun begins at its weakest point on the Winter solstice and continues to wax and grow in strength until it reaches it fullness and peak of power at the Summer Solstice. After the Summer solstice the Sun begins to wain and decreases in power until it again reaches it’s weakest point again at the Winter Solstice. The God also has three aspects as well. Where the Goddess has the Maiden, Mother and Crone aspect the God has his as well. We see him in his cycles as the Youth, Husband/Father and Sage.

Now I will cover how we can use this knowledge to interact with the God. Many do not realize that the God can be used in spell work just like the Goddess. We work with the God in a similar way that we work with the Goddess. When working with the God in spell work you fashion the spells that take into consideration the solar cycle at the time you wish to cast the spell. When doing spells meant to bring this to you or to have things grow within your life you would do such spells during the waxing period of solar energy.