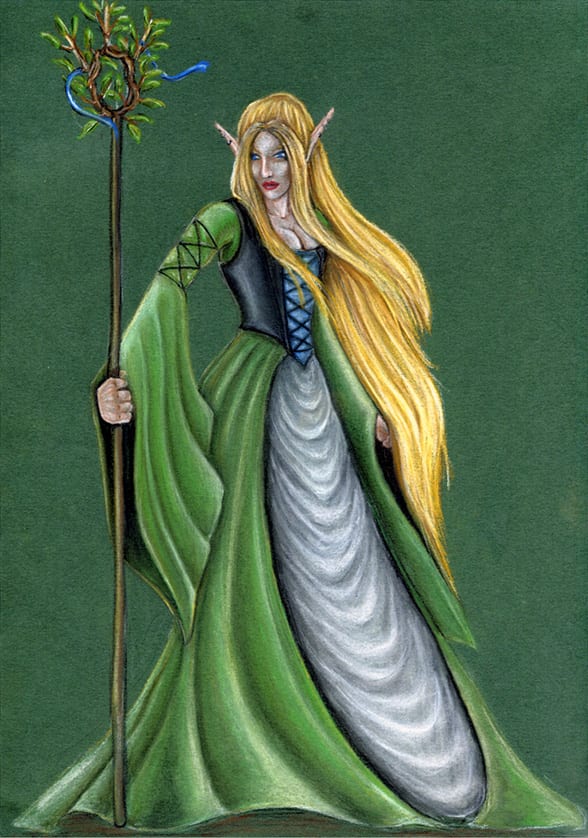 The Path of Harmony Through Balance

The art of the Nature Mage, arguably, has been around as long as human kind itself. The interface between human and nature has always been a topic of interest to those that wished to find harmony. From the innate interest in our surroundings humans have found a mystic method, as well, of working with the environment in the form of Shamanic and Druidic magics — nature magic, in general. There are some common threads that run along all of these varied traditions, however, and these are the things which define the use of the Nature magics. In all of these magics, the constant has been the use of spirits, a synergy with the flow of nature, minor Elemental skills, and the use of nature to restore itself.

Long before the days of the fantasy genre as we know it now, there were the stories and legends and beliefs of the magicians of nature. One part of their art was a communication with the spirits of nature. The legends of creatures we now call mythological being, or names drawn from that which some call “otherkin” and “elemental spirits”, stem from a much earlier time. Stories of creatures that existed in the trees, in the waters, in the airs, and in or around many other things can be traced back with ease to early Greek mythology, which at that time was mystic belief. This tradition of communicating with the fae and sprites has been carried over into the realm of the Nature Mage. Undine, sylph, dryad, pixie, sprite, faerie, and other nature creatures are a natural part of the workings of many of this type of magician. Some creatures, such as some of the types of dryad, are said to inhabit trees or lakes (depending on the sort) and will aid the magician attuned to their presence and who protects their habitation. These creatures have been noted, throughout the ages, to speak to the magician and related the tales of the forest, or to induce pleasant dreams while the magician sleeps. They are known to keep away trespassers from their beloved nature, to influence targets designated by keepers of nature, to relay information to and from the animals, and to soothe general cares, more or less.

Also the in the realm of the nature magician, and most particularly the Shaman, is the desire to create a unity of being with nature. Instead of working outside the bounds of nature or attempting to use nature in the cosmic clash of wills, the Nature Mage attempts to fully understand the innermost mechanics of nature and become part of the mystic workings within that system to their fullest capacity. Towards this end, the forces of nature will naturally be attuned to the magician and will aid them, thus mirroring, in a way, the sentiment expressed by King Solomon (?) in the Lemegeton when he said

“Magic is the Highest, most Absolute, and most Divine Knowledge of Natural Philosophy, advanced in its works and wonderful operations by a right understanding of the inward and occult virtue of things; so that true Agents being applied to proper Patients, strange and admirable effects will thereby be produced. Whence magicians are profound and diligent searchers into Nature; they, because of their skill, know how to anticipate an effect, the which to the vulgar shall seem to be a miracle.”

This sentiment — of working inside the confines of the natural world yet appearing supernatural through a more perfect understanding — is at the very heart of the natural philosophy of magic and the use of nature’s energy. In Druidic lore, this power was even given a name: the Green Man. The Green Man is a male form of the same sentiment of Gaia, or Mother Earth. The Green Man is the spirit of nature itself, in a way, almost an entity, yet not truly conscious insofar as having directed will. Much like the art of sailing does not “control” the wind, so the Nature Mage does not “control” nature; it is simply the use of these powers to their utmost given the circumstances.

Also tightly bound into this art is the use of the raw elemental powers. Elementalism, to a lesser extent, is a key to power in the nature magic theory. A common tie with the natural powers allows the Druid to access the lesser Elemental effects insofar as their aide the power of nature to run its course. However, this is somewhat of a side-note in the larger scheme of things. Another lesser-mentioned ability of the Druid is that of shapeshifting. If granted blessings by the Green Man, or simply through their own adept skill in the natural arts, some Druidic lore indicates that the ability to change into a wolf was possible (this ability is known as “lycanthropy”). It is not mentioned whether this ability is the actual physical modification of body, or whether it is only taking on the mind of animals (usually more specifically a wolf). Most assume it was a combination of the terror of enemies of the Druids combined with the sight of their apparel (which would have been furs), but, even if not actual lycanthropy, the art of Berserking and taking on “animal spirits” remains even to this day.

The last notable skill of the Druid/Shaman/Nature magician is their ability to use the restorative and firm properties of the nature energy to heal and renew to the end of the restoration of the natural flow of things, or to end unnatural disruptions. This has been done, in almost all traditions (though going by different names), by creating a Grove. The creation of a central place in nature where the magician can work from, somewhat as a centre of operations, is known for its ability to aid in physical rejuvenation and to once again align the misformed energies that may be present in a body. It is an ability which provides strengths for the creatures of nature at a Shaman’s command, which maintains a balance, and which enables the normal way of things to resume. This grounding ability acts as a canopy through which the magician may take comfort, shelter, and may restore their energies once more. The eternal struggle between nature and chaos is one which continues, and at both sides there are always contestants. Order and Anarchy are always at each other’s heels, and it is Nature that finds the balance between them.