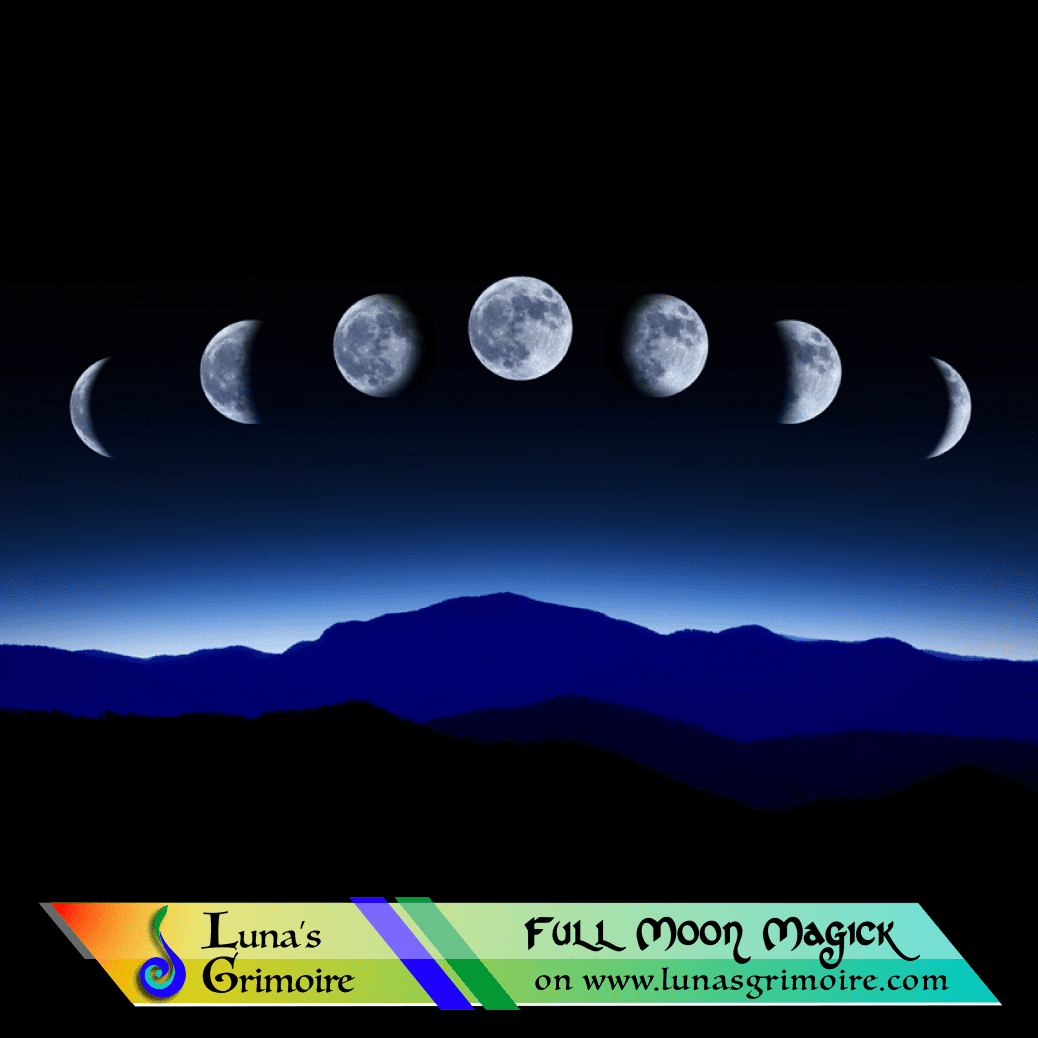 Note: There are 12 Full moons a year but because of the odd balance of days once every 2 years or so… a month has two full moon. The second full moon in known as the blue moon. This makes it a very powerful full moon and a very powerful month. 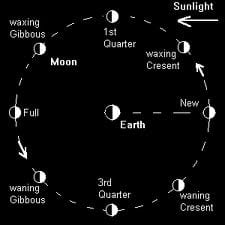 The energy of the new moon is great for new beginnings, initiating a new project, or the start of an adventure. Under the new moon, work with the new – the beginning of a new life, new career, new relationship, a new project and maybe a new you. Goddess in Maiden stage.

The waxing moon begins seven to fourteen days after the new moon. Use the waxing moon for constructive magick, such as love spells, magick for wealth and success, courage, friendship, luck or good health.

The waxing moon, when the moon is growing larger in the sky, is a time of growth. Under this moon you want to work with building on what you have started under the new moon. The larger the moon gets, the more powerfully you will feel the Goddesses energy. Goddess in Mother Stage.

A powerful energy for rituals of prophecy, divination and protection. Any spellwork that requires extra energy, such as finding a new job or healing serious conditions, is best begun during the full moon. Also for love, gaining sacred knowledge, legal matters, attracting money and prophetic dreams.

This is a time to really go for what you want. When the moon is full, her energy is very powerful and you can ask her to help you to accomplish almost anything. The energy of the full moon is great for magick involving divination, dreams, love and whatever else you desire. Some say full moon energy is available three days before the actual date of the full moon and three days after that date. I personally say the day before and the day after the full moon is most potent.

The Waning Moon: Taking Away

Begin waning moon magick three-and-a-half to ten-and-a-half days after the full moon. The waning moon is used for banishing negativity, for curing addictions, and illness.

When the moon is waning, or getting smaller, you want to work with banishing magick. This is the time to get rid of negative things in your life. Goddess in Crone Stage.

The Dark Moon: Take A Break

Many witches believe that you should not practice magick at all during the three days a month when the moon is dark and is not visible in the sky. This is the time of the month when the Goddess is thought to have descended into the underworld. She is in mourning, and her energy is at its lowest point. Meditation and relaxation are the best things to do during this phase of the moon.

As the moon travels around its orbit, it enters various signs of the zodiac. As the moon transits from one sign to the other there is a period of a few hours where the moon is void. Some traditions do not do magick in these hours.

When two moons fall in one calendar month the second is called the blue Moon, and this is the month that we will use for our wishes. It falls in a different month each year but it is a very powerful moon. The blue moon is always the second of the full moons in the corresponding month. We need to write down aims and goals for the up and coming year. Place them in an envelope and don’t look at them until the next blue moon. Dress your blue moon altar in the colours that correspond to the month it falls into, and place flowers and fruits from that month, also place pictures of things you would like in your life. Stay real here, and keep it down to earth.

Plan a ritual of protection around your home and family.

Plan a ritual to ask the Old Ones for help in planning your future.

Plan a ritual to plant your desires.

Plan a ritual to physically plant your seeds of desire in Mother Earth.

Plan a ritual to reaffirm your goals.

Plan a ritual to balance your spiritual and physical desires.

Plan a ritual to decide what you will do once your goals have been met.

Plan a ritual to preserve what you already have.

Plan a ritual of Thanksgiving for all the Old.

Plan another ritual of Thanksgiving.

Plan for a ritual to work on ridding yourself of negative thoughts and vibrations.

Plan for a ritual to help you remain steadfast in your convictions.

The Moon spends a day or two each month in each of the twelve signs of the zodiac. The sign the moon is transiting through can be used to good advantage during spellwork.

A good time to perform spells related to job ventures and all new projects related to money. Also a good time to develop strength and courage, and lust spells. This is not a good moon for performing divination.

This moon is excellent for spellwork relatd to love, creativity, and inner peace. Spells done at this time take the longest to manifest, but the results will be very long lasting and be stable.

The perfect time for spells dealing with communications, healing, and uncrossing spells. Be careful- the moon in Gemini can be unpredictable and unstable.

Excellent for any spell involving the home, fertility, children, or divination.

Spells involving leadership, prosperity, fame and career are best done in Leo, but do not perform any spells involving love, or any other emotion, as Leo may actually counteract it.

Excellent for working a spell with a partner, and for magick involving marriage, couples, partnership, peace, and fairness.

Use this energy for mysteries, the occult, divination, and sex magick.

This is an excellent time to experiment with new techniques or magick spells, but it is not a good time for psychic worrk or divination.

Perfect for spells to manifest life’s basiic needs and for stability.

The best time to work on behalf of others, but consciously stay focused on your heart to maintain a higher consciousness with others, and to avoid selfish motives.

Perfect for divination and psychic work, past life regressions, and communication with spirits.