Magic or Magick? What’s the meaning behind the “k”? 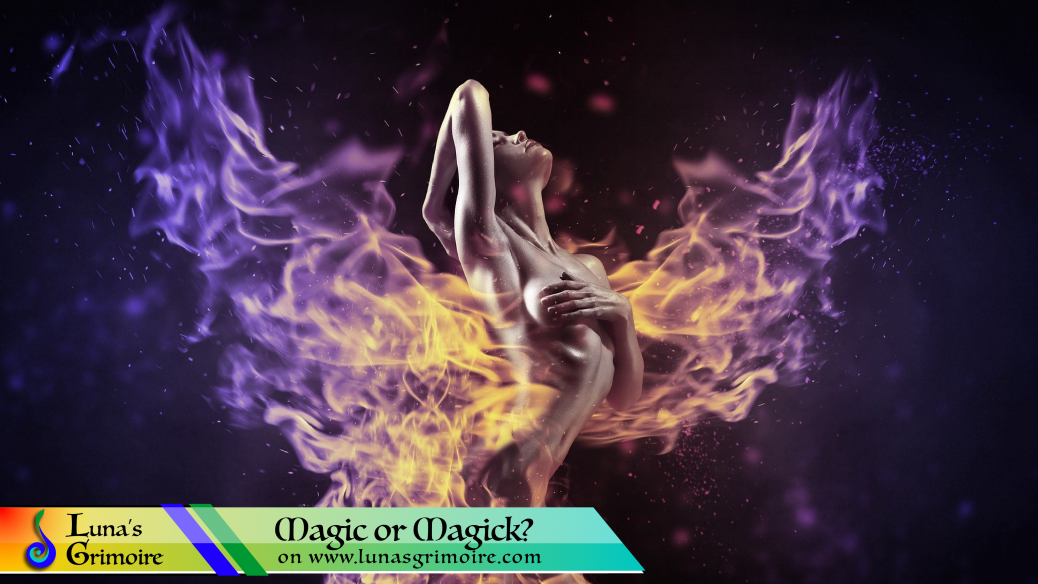 Does the extra ‘k’ have a meaning? How important is it?

If you have been reading anything about paganism, Wicca, witchcraft or the like, you would have come across an alternative spelling for the word, ‘magic’. The word ‘magick’ is said to be closer to the origin word, and holds a more significant power. Others suggest that it may have been popularised due to the rise of magicians and magic tricks, so the alternative with a ‘k’ would have been to separate the stage magicians from the spiritualists. But let’s dive in and look for ourselves, shall we?

The word magic has been used in language for centuries, with it’s root in Old Persian. The root of the origin word in Old Persian, ‘magh-‘, means to be able, to have power. In those times, magic(k) did not really exist as it does now. In short, you had the ability or power to heal the sick, much like our modern doctors do.

To understand why the word was originally used in close association with the pagan world today, you have to take a trip back in time, to discover what life was like back then. In the old world, natural magic did not include the commune with spirits and was an important part of daily life. For the purpose of this article, we’re going to use magic in association with healing and sorcery in association with spirit communing.

The magical practitioners were the doctors, nurses, healers, midwives, and chemists in those days. They knew what herbs could ease a tummy ache, how to roughly set a broken bone, which herbal mixtures could heal a wound, and what leaves could be infused in a tea to aid childbirth. They were a very necessary part of daily life, especially in times where a sick child could easily die or a wound could fester into sepsis. They were no different than our nutritionists and alternative medicine practitioners today. Sorcerers, on the other hand, dealt with the invisible world, the spirit world, to tell the future, to bring good or bad fortune and speak to the dead. They were also known to perform early forms of exorcisms, banishing malicious spirits from living hosts and homes.

Old Greek and Persian mages were either or both magical practitioners and sorcerers. They also had oracles, wise women who were sorcerers, can often guided the Kings of Old on their battle conquests. We have seen this in Hollywood, in the Spartan tale of 300. While oracles did not live in faraway mountains that required a deadly ascent to reach the top, oracles were a large part of life back then. Of course, should you get the prediction wrong, you could be sentenced to death, so it was pretty risky business.

Fast forward to the 1800s when stage magic was popularised and the term optical illusion was coined, which separated stage magic from witchcraft and drui (Druid priest). This allowed stage magicians to continue their practice in the public eye, and also allowed Irish druid priests to continue practicing their belief system openly, as they did not practice the art of divination. Throughout the Middle Ages, it was legal to practice natural magic, or herbal medicine, as long as the practice did not include the commune with the spirit world, which was outlawed at the time, driving witchcraft into the shadows. Natural magic could be scientifically explained as the manipulation of natural forces, later known as alchemy, and speaking to the dead was considered an aberration and ungodly, with no ability to prove whether the sorcerer was speaking with the dead, or with a demon. Humans classically fear the unknown, the invisible.

But in the 20th Century, occultist Aleister Crowley (1875-1947) resurrected the older spelling of magic, magick, which was infrequently used in the early 1800s, as a means to separate stage magic and Hollywood from the spiritual practice of magic, or witchcraft. It is said that he believed that the six letter alternative spelling was more potent as the number six is a universal magic number. There is no proof that exists to back up this claim.

Currently, the dictionary defines the word ‘magic’ as:

1. the art of producing illusions as entertainment by the use of sleight of hand, deceptive devices, etc.; legerdemain; conjuring:

2. the art of producing a desired effect or result through the use of incantation or various other techniques that presumably assure human control of supernatural agencies or the forces of nature.

Technically speaking, both can be used and are correct in the spiritual world. There is no requirement to use one specifically, and you can use either one in spells with no less or more potency in your work.

Magic or magick, both have the same meaning in the spiritual world, and have equal power. The magic is within you, not within the words.