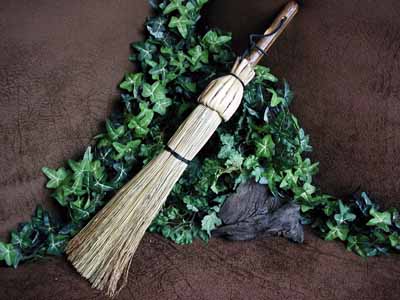 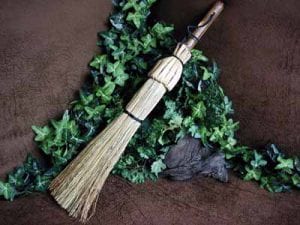 A birch besom was placed aslant in the open doorway of the house, with its head on the doorstep and the top of its handle on the doorpost. First a young man jumped over it, then his bride, in the presence of witnesses. If either touched or knocked it in any way, the marriage was not recognized. In this kind of marriage, a woman kept her own home and did not become the property of her husband. It was a partnership, “cyd-fydio,” rather than an ownership. A child of the marriage was considered to be legitimate. If the couple decided to divorce, they simply jumped back over the broomstick again, but this could only be done in the first year of marriage. If a child had come, it was the father’s responsibility. Mischievous boys played with this symbolism by placing a birch broom over a doorstep before an unmarried lady went out of the house. This was supposed to make her pregnant before marriage! As late as the 1920s in Surrey, a conversation was recorded wherein a man whose wife was away said jokingly to a young woman: “I shall be putting the broom out of my chimney if she stays away much longer. Will you come in and do for me?”