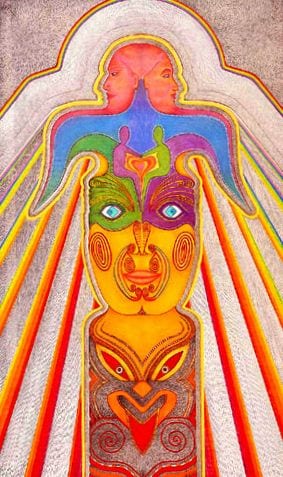 Huna, the spiritual and magical belief system of the ancient Polynesians, was brought to the public in England and North America by Max Freedom Long in the first half of the twentieth century. Huna means “secret,” and its priests are called kahunas or keepers of the secret. Fascinated by the Hawaiian kahunas who performed miraculous healings, firewalking, and other feats, Long formed a society known as the Huna Research Associates to study this form of magic.

According to huna’s tenets, the human psyche is composed of three nonphysical selves, entities, or levels of consciousness. The low self, akin to the subconscious, is called unihipili, which means “spirit.” It is considered to be a primitive part that can be guided by the middle self, or uhane. Uhane means “the spirit that talks” and refers to the everyday conscious self and the rational mind. The high self, or aumakua, which means “utterly trustworthy parental spirit,” is the divine part of the individual that ties you to the Godhead.

These three selves are linked to one another and the physical body by etheric material called aka cords. These cords serve as conduits that allow mana, or the life force (manufactured by the low self), to flow between the selves. Communication between the selves occurs via the aka cords, too. In magical work, the middle self creates an image of a desired condition and conveys it to the low self. The low self then sends mana to the high self to use in carrying out the intentions of the middle self. A “braided cord” called aha connects everybody’s high selves together, allowing contact between individuals to take place. Healing, protection, and other magical work can be done, even at great distance, by channeling energy and intentions along these cords.