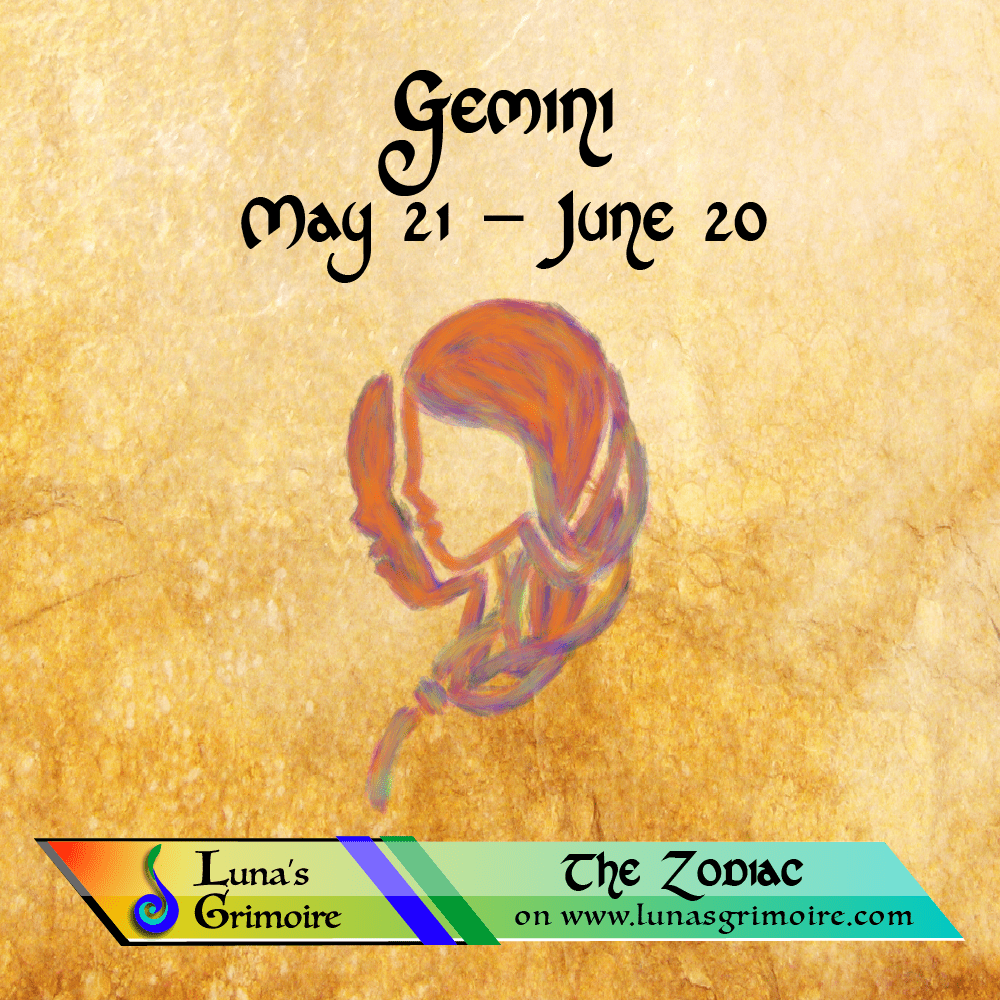 Gemini, the sign of the Twins, is dual-natured, elusive, complex and contradictory. On the one hand it produces the virtue of versatility, and on the other the vices of two-facedness and flightiness. The sign is linked with Mercury, the planet of childhood and youth, and its subjects tend to have the graces and faults of the young. When they are good, they are very attractive; when they are bad they are more the worse for being the charmers they are. Like children they are lively, and happy, if circumstances are right for them, or egocentric, imaginative and restless. They take up new activities enthusiastically but lack application, constantly needing new interests, flitting from project to project as apparently purposelessly as a butterfly dancing from flower to flower. To them life is a game which must always be full of fresh moves and continuous entertainment, free of labor and routine. Changing horses in the middle of the stream is another small quirk in the Gemini personality which makes decision making, and sticking to a decision, particularly hard for them.

Since they lack the quality of conscientiousness, they are apt to fight a losing battle in any attempts they make to be moral (in the widest sense of the word). Their good qualities are attractive and come easily to them. They are affectionate, courteous, kind, generous, and thoughtful towards the poor and suffering – provided none of the activities resulting from expressing these traits interferes too greatly with their own lives and comforts. They quickly learn to use their outward attractiveness to gain their own ends, and when striving for these they will use any weapon in their armory – unscrupulous lying, and cunning evasiveness; escaping blame by contriving to put it on other people, wrapped up in all the charm they can turn on. In their better moments they may strive to be honest and straightforward, but self-interest is almost always the victor. If things go against them, they sulk like children.

Also like children, they demand attention, admiration, and the spending on them of time, energy and money, throwing tantrums if they don’t get what they want. They reflect every change in their surroundings, like chameleons, and can become pessimistic, sullen, peevish and materialistically self-centered if circumstances force them to struggle in any way. If the conditions of life become really adverse, their strength of will may desert them entirely. They can become uncertain of themselves, either withdrawn, or nervously excitable worriers, sullenly discontented, hard and irritable, with “Self” looming ever larger in their struggles. On the other hand their versatility can make them very adaptable, adjusting themselves to control the world around them by means of their inherent ingenuity and cleverness.

Most Gemini have a keen, intuitive, sometimes brilliant intelligence and they love cerebral challenges. But their concentration, though intense for a while, does not last. Their mental agility and energy give them a voracious appetite for knowledge from youth onward, though they dislike the labor of learning. They easily grasp almost everything requiring intelligence and mental dexterity, and are often able to marry manual skills to their qualities of mind. Their intellect is strongly analytical and sometimes gives them so great an ability to see both sides of a question that they vacillate and find it hard to make decisions. But their intelligence may very well be used to control and unify the duality of their natures into a most efficient unit. If faced with difficulties, they have little determination to worry at a problem until they find a solution – they will pick the brains of others. In their intellectual pursuits, as in other departments of their lives, they risk becoming dilettantes, losing themselves in too many projects which they follow until they become difficult.

In love they are fickle, not intentionally so but because of the basic inconsistency of their emotional nature, which has an amoral aspect to it. Their is a side to Geminians which can become deeply involved emotionally, and another, hostile to sentimentality, which stands back from a romantic situation, laughing at it and the protagonists in it, including themselves while analyzing it intellectually. Gemini subjects take nothing seriously. So, in love, in spite of their temporary depth of feeling, for the intensity of involvement lasts only while it is new, they are superficial, light-hearted, cool, flirtatious and unimaginative in the understanding of the pain they may give others. They like intrigue, the excitement of the chase, but once they have caught the prey, they lose interest and look around for the next creature to pursue. In less serious situations they make witty, entertaining companions, good acquaintances rather than friends. Even at their worst they are never dull – there is usually playfulness below the surface, and they can be brilliant conversationalists – but they can also be quarrelsome, prattlers, boasters, liars and cheats.

Geminians can be successful in many walks of life though their general characteristics tend to make them unreliable. They are often skilled manipulators of language, in speech and writing, and may be: debaters, diplomats (though in politics they are more interested in theory than practice), orators, preachers (brilliant rather than profound), teachers, authors, poets, journalists, or lawyers. In business any work which combines quick-wittedness with a change of surroundings suits them; working as a traveling salesperson, brokerage work, or dealing with the public in any capacity is right up their alley. Because they are dispassionate, logical, rational and analytical they make good scientists, especially in the fields of medicine and astronomy. They can also make excellent members of the Armed Forces, for they take danger no more seriously than anything else and can earn themselves a reputation for devotion to duty and heroic acts. In the arts they may excel in music, painting and sculpture. They make good psychic researchers of a sceptical kind. Negatively they can degenerate into confidence tricksters, thieves and even adepts in the black arts.

Gemini rules the arms, shoulders, hands, lungs and nervous system and its subjects need to beware of diseases and accidents associated with the upper part of the body, as well as nervous and pulmonary disorders such as catarrh and bronchitis. Their mercurial nature may also affect a constitution which is not strong if it is put under strain. You are prone to taking unnecessary risks and wind up harming yourself or others in the process. Sometimes pursuing pleasure too vigorously could also qualify as risk taking.

Your starstone is the moss agate. It has been shown to be beneficial to the health of Geminis who aresuffering from circulatory problems and has been shown as an aid to getting your intuitive feelings tuned to a higher pitch. It is also an aid to relieving depression. There is another gemstone which is used for Gemini and that is the emerald, but the moss agate vibrates to the levels of your ruling planet, Mercury, and therefore is much more beneficial for you.