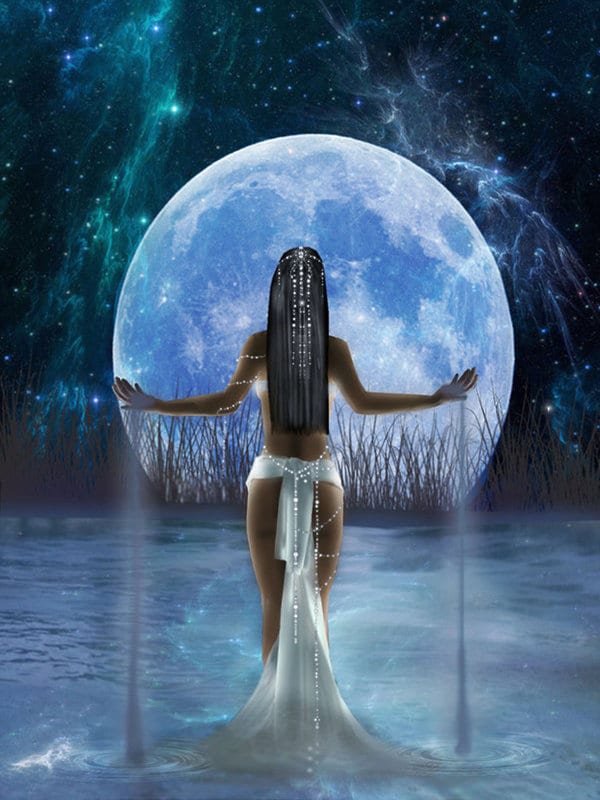 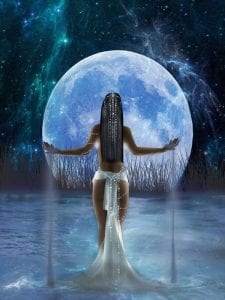 Here you will find a list of Egyptian Gods and Goddesses:

Ammon
Also AMON; AMUN; AMEN. “Hidden.” King of the gods of Egypt. Patron of the Pharoahs. Originally a god of fertility, a local deity of Memphis. Ammon became linked with the sun god Ra through the royal family, becoming Ammon-Ra.

Anubis
The jackal-headed god. Anubis can foresee a mortal’s destiny and is associated with magic and divination. Anubis supervises the weighing of the soul when the departed are brought to the hall of the dead.

Astarte
The Assyro-Babylonian goddess Ishtar, inducted into the Egyptian pantheon and made a daughter of Ammon-Ra. Sometimes identified (or confused, which is the same thing) with Isis.

Atum
The first of the gods, the self-created. By sheer will, Atum formed himself out of the stagnant waters of Nun. Atum was bisexual and was sometimes called “the great He-She.” The Egyptians had two cosmogonies,one taught by the priests at Heliopolis and the other by the priests at Memphis. The priests at Memphis taught that Nun and Atum, together with Atum’s children Shu and Tefnut, were aspects or forms of Ptah.

Bast
Also BASTET. The cat-headed goddess, a local deity of the delta. The kindly goddess of joy, music and dancing. Cats were sacred to Bast as a symbol of animal passion. Bast’s devotees celebrated their lady with processions of flower-laden barges and orgiastic ceremonies. Her festivals were licentious and quite popular.

Hathor
A sky goddess, sometimes represented as a woman with cow’s horns between which hangs a solar disc, sometimes portrayed as a cow. Hathor concerns herself with beauty, love and marriage, and watches over women giving birth. Mother and wife of Ra. Hathor is also a goddess of death and offers comfort to the newly dead as they pass into the afterworld.

Horus
The falcon-headed god. A complex deity with many aspects. Some of them are: Horus the Elder, a sky god whose eyes are the sun and the moon, continually at war with Set, the god of evil; Horus of the Horizon, symbolized by the rising and setting sun; Horus the Child, whose frequent depictions as a baby at the breast of his mother Isis influenced Christian images of the Madonna and the Christ child; Horus, son of Isis, avenger of Osiris. There were many others.

Isis
Wife and sister of Osiris (the ancients had nothing against a little divine incest). The ideal wife and mother. Generally a goddess of the home and person rather than of the temple and the priest. After the twenty sixth dynasty, Isis is increasingly portrayed as a nursing mother, and her cult eventually spread throughout the Roman empire.

Maat
Goddess of truth and justice. Her symbol is the feather.

Min
A god of fertility and sexual potency. An ancient god of pre-dynastic origins. His symbol is the thunderbolt. As orgiastic festivals were held in his honor, Min was quite a popular god.

Nun
God of the primal waters. Nun was a mass of stagnant water which filled all the universe.

Osiris
At first the god of corn; later the god of the dead. Osiris brought civilization to the Egyptians, teaching them the uses of corn and wine, weaving, sculpture, religion, music and law. Set slew Osiris and dismembered the body; but Osiris’ consort, Isis, reassembled the body and brought Osiris back to life. Osiris then retired to the underworld. Osiris is the god of the Nile which rises and falls every year; the god of corn and the vine, which flourish, die, and flourish once more; and the god of the rising and setting sun.

Ptah
The artificer. The creator god. According to the priests of Memphis, the fount of all creation. God of artisans and artists, designers, builders, architects, masons, metal workers. Ptah’s consort is Sekhmut, goddess of war.

Ra
God of the sun; sometimes identified or considered synonomous with Atum. Ra created man from his tears. At one time Ra became so digusted with men that he orderd Hathor to kill them all. This Hathor did with such zeal that Ra took pity on men and ordered Hathor to stop. Crazed with blood, Hathor ignored the order, and Ra resorted to chicanery to save humankind. Ra mixed beer with pomegranate juice and left pots of the concoction about the battlefield. Thinking the mixture was blood, Hathor drank it greedily and got too swacked to carry out her mission.

Sekhmut
Goddess of war and battles, consort of Ptah. Hathor took Sekhmut’s shape when she made war on men. Sekhmut is usually portrayed as a woman with the head of a lionness, sometimes brandishing a knife in an upraised hand.

Set
Red of hair and eyes, pale of skin, Set is the god of evil, of drought, of destruction, thunder and storm. Set tore himself from his mother’s womb in his hurry to be born. Every month Set attacks and devours the moon, the sanctuary of Osiris and the gathering place of the souls of the recently dead.

Thoth
“Thrice Greatest.” God of wisdom, music, magic, medicine, astronomy, geometry, surveying, art and and writing. Historian, scribe and judge. Thoth’s priests claimed Thoth was the Demi-Urge who created everything from sound. It was said that Thoth wrote books in which he set forth a fabulous knowldege of magic and incantation, and then concealed them in a crypt.