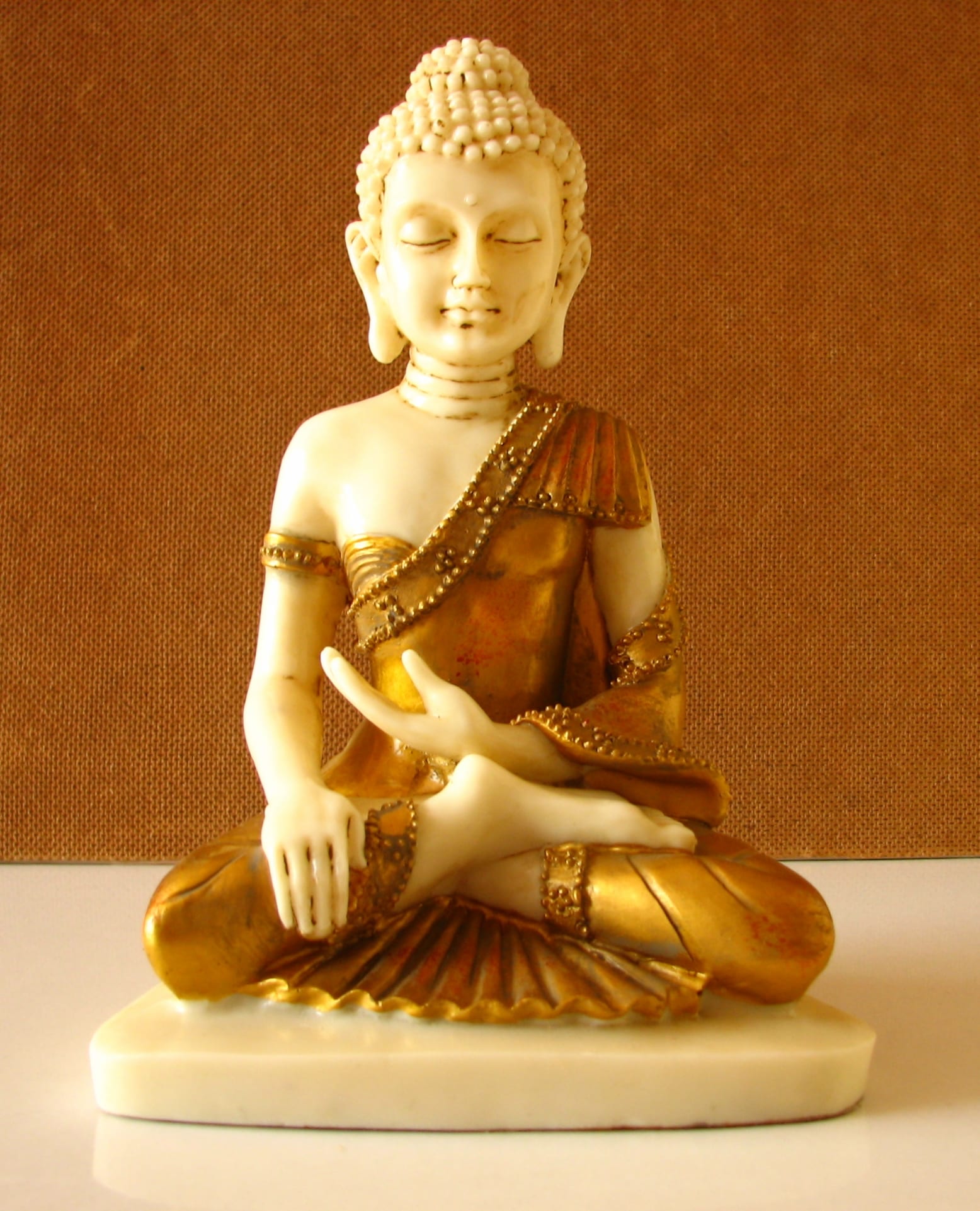 Buddhism is a dharmic, non-theistic religion, which is also a philosophy and a system of psychology. Buddhism is also known as Buddha Dharma or Dhamma, which means the “teachings of the Awakened One” in Sanskrit and Pali, the languages of ancient Buddhist texts. Buddhism was founded around the fifth century BCE by Siddhartha Gautama, hereafter referred to as “the Buddha”.

Hinduism gave birth to Jainism and Buddhism, and the three religions have much in common. Jainism emphasized that spiritual release or salvation was possible, no matter what caste you occupied. The teachingsof the Buddha consisted of the Four Noble Truths and the belief that the supreme goal of life is nirvana.

Buddhism and Hinduism share some core beliefs while rejecting others. For instance, Buddhism does not accept the Vedic literature and rites or the caste system, though it does retain the concept of reincarnation. They also use many of the same words: atman (self or soul), yoga (union), karma (deed or task), and dharma (rule or law), to name a few.

Buddhism grew up in the sixth century B.C.E. Like Jainism, it was an alternative to Hinduism and resembled Jainism in several respects. Buddhism rejected the authority of the Vedas and the caste system and offered a vision of salvation based on the actions of the individual and fueled by effort. Whereas Jainism was extreme in its ascetic precepts, Buddhism prescribed a more moderate path or “middle way” between the desire for worldly indulgence and the extreme asceticism of Mahavira. Due to this middle path, Buddhism drew more followers and held great appeal in India for several centuries. It would also hold great appeal in China, Japan, Korea, and Southeast Asia when Buddhist missionaries began traveling there.

In fact, three major traditions dominated Chinese culture up until the twentieth century: Confucianism, Daoism (Taoism), and Buddhism, and they coexisted — and often shared moral and social ideas — for about 2,500 years. But when Mao Zedong, better known as Chairman Mao, established China as a communist state, the regime destroyed long-established values. Traditional institutions, religions included, were closed and their adherents persecuted.

This trend of Buddhists residing mainly in Asia and Southeast Asia continues today. While Buddhism was spreading into foreign lands, it was losing ground to a resurgence in Hinduism in India, where Muslim conquest had also diminished the number of Buddhists.

Buddha was the title given to Siddhartha Gautama, the founder of Buddhism. The majority of Buddhists believe that there have been, and will be in the future, many other Buddhas. Some even claim that JesusChrist was a Buddha.

The absolute aim of Buddhist worship and its practice is following and preserving the teaching of the Buddha, Siddartha Guatama. This doesn’t mean just following his teachings, but also manifesting their beliefs in everyday life.

The Life of Siddhartha

Guatama’s mother, Mahamaya, queen of the kingdom of Sakyas, had a dream. In it, a beautiful silver elephant entered her womb through her side. Priests interpreted the dream and predicted the birth of a son who would be a Buddha. Ten lunar months later, the queen had to take a journey and gave birth in an enclosed park.

A haunting prediction at the time of his birth said that her son would become a king, but the same prediction said that he would give up his kingdom if he came face to face with human misery. To lessen the possibility of his son witnessing suffering, the father shielded him from sickness and death. Whenever Guatama left the palace in his chariot, his aids were instructed to clear the roads of four sights: dead people, aged people, diseased people, and ascetic monks. Siddhartha lived with his family in the seclusion and luxury of the palace and was provided with riches and comfort. His father had his son’s life mapped out for him: he’d become a warrior and a great king. But Siddhartha had thoughts of his own.

The turning point came when Siddhartha went outside the palace with his charioteer. On the first trip, he saw an elderly, ill man tottering along. The next day he repeated the trip; this time saw a sick man on the ground, suffering and obviously very ill. When he went out on the third day, he saw a corpse. He was shocked by what he saw and asked his charioteer to explain what had he had seen. The charioteer told him the meaning of the sights. After the trip, Guatama returned to the palace and meditated about what he had seen.

He continued to search for some kind of meaning. On the fourth trip with his charioteer, he saw an old man with a shaven head wearing a yellow robe. The man possessed a calm, serene appearance. Siddhartha asked the charioteer who he was. The charioteer told him he was a holy man, an ascetic who had attained complete enlightenment and thus freedom from care. In the placid image of this mendicant Guatama saw his own destiny. He was so impressed that he started a pattern of fasting and self-mortification, as if such activities would show him the way to enlightenment. It was at this time that his son was born. He named him Rahula, which means “fetter” or “bond.”

The story goes that Guatama felt no pleasure when his child was born. Indeed, the name of his son, Rahula, means “fetter.” The name implies that even the joy of giving birth to a healthy child could bind one to his material existence and hinder the quest for spiritual liberation.

Siddhartha then made what is known as the Great Renunciation, a journey every bit as momentous as it sounds. He decided to give up being a prince to become a wandering ascetic. He was twenty-nine years old when he saddled his horse and left in the middle of the night; he didn’t want to wake his wife or son. He figured he would return to them one day. He rode south to Gotama, where there were centers of spiritual learning.

Siddhartha arrived at a wooded area near a village called Uruvela. A river was at hand to provide water and he could beg for food in the village. He tried a familiar spiritual discipline known as mortification of the body. He began by eating less food. His fasting became so extreme that he once subsisted on six grains of rice per day, becoming so thin that he could hold his stomach in and touch his backbone.

In the final analysis, asceticism as a philosophy, as a way of life, did not provide Siddhartha with the enlightenment he sought. He had taken renunciation of pleasure to such an extreme that he pursued anything and everything that was unpleasant. In addition, the fasting debilitated him, making him unfit for his pursuit of spiritual progress.

The core of Buddhist doctrine is the Four Noble Truths and the Eightfold Path. Buddha’s view of the human condition and the solution to the spiritual ills of that condition can be found by living accordingto these truths. The first three of the Four Noble Truths are stages of a logical argument representing Buddha’s evolution from a comfortable life as a prince to his search for enlightenment. Coupled with the Eightfold Path to those truths, this is Buddha’s philosophy for finding salvation.

The Noble Truth of Suffering

Life is suffering (or dukkha), a “vale of tears.” Dissatisfaction is everywhere, as are unfulfilled desires, and the separation from what one wants. Sadness and sorrow are a constant on the landscape of existence. Even when we experience ecstasy, it lasts only a little while. For every joy there is a sorrow, but for every sorrow there may not be joy. Suffering can be found in three different categories:

The notion of self is the source of suffering. Remove the self and you will remove the suffering. Here Buddhism differs from Hinduism and Western philosophies, which assert the existence of the self. Finally, it is not merely illness and ageing, but the discontent and awareness of these developments that makes the suffering sharper.

The Noble Truth of the Cause of Suffering

The cause of this suffering is desire or attachment to the world in a way that makes you liable to suffering. The longing for desire is threefold: There is a desire for sensual pleasure and prosperity; a desire to see the end of unpleasantness; and a desire to go on living. Seeking pleasure is imprudent and futile — pleasure is elusive or, when it is achieved, turns to displeasure. Since people wish to continue in their existence, they end up clinging to life, which leads to despair. Seeking prosperity, too, ends in its own kind of despair, for an appetite for success is insatiable and thus never ending. Hankering for more pleasure and wealth may lead to the conclusion that your well-being depends on these things. A desire for increased status will always lead to bad karma.

The Noble Truth of the Cessation of Suffering

This is also called the Middle Path. The Buddha told his five disciples:“There are two extremes which should be avoided by a man who renounces the world. One of these is the practice of those things related to the passions, and particularly sensuality; this is low, uncivilized, unworthy and unprofitable, and is fit only for the worldly minded. The other extreme is the practice of self-mortification, which is painful, undignified, and equally unprofitable.”

Both extremes were familiar to Buddha. As a young prince, he had followed a sensual life. He had also rejected the life of asceticism. Sensuality slowed his spiritual progress and asceticism weakened his intellect.

The middle-ground alternative was the Eightfold Path, which was neither self-mortification nor self-indulgence. Rather, the way to achieve enlightenment is through a path of spiritual, moral, and mental exercise. The path includes eight parts:

These eight aspects of the path fit three attributes:

All in all, Buddha’s core philosophy is a practical and spiritual approach to living. The philosophy has led many to live peaceful, fulfilled lives.