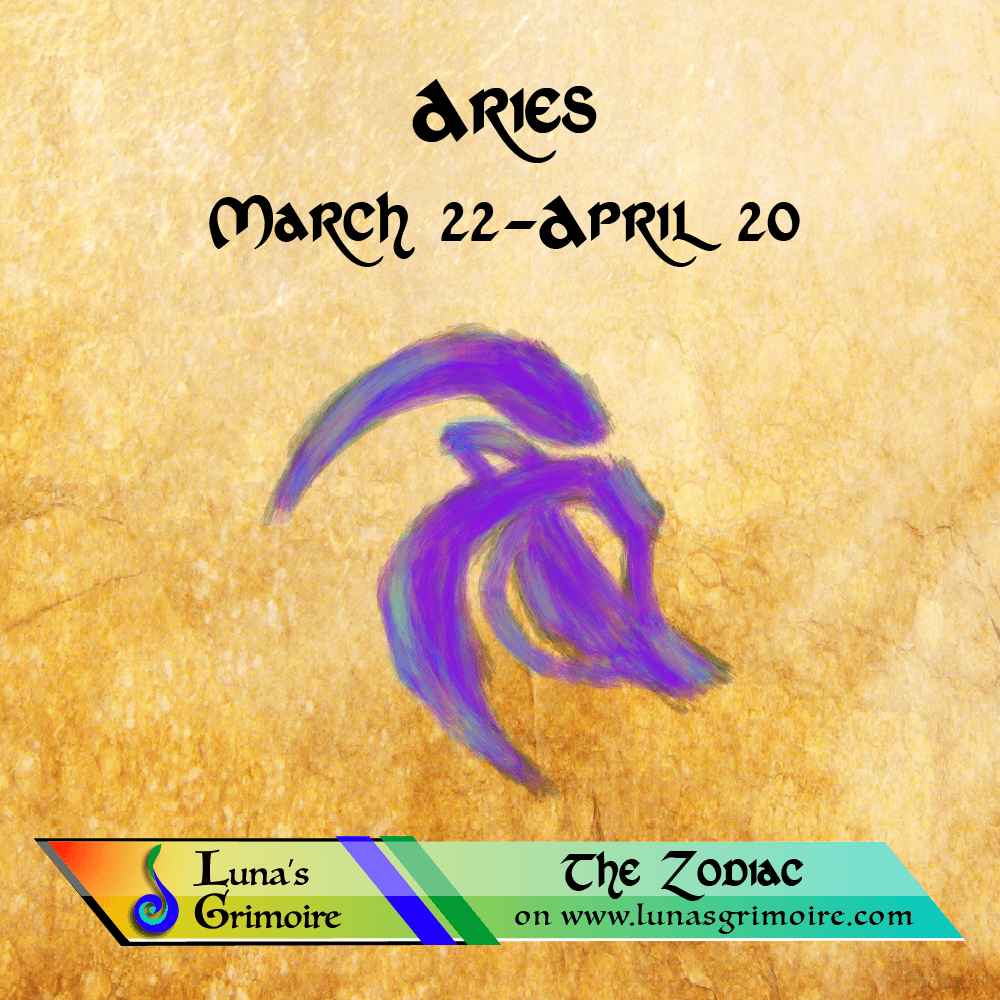 The spring equinox, March 21, is the beginning of the new zodiacal year and Aries, the first sign, is therefore that of new beginnings. The young ram is adventurous, ambitious, impulsive, enthusiastic and full of energy. The Arian is a pioneer both in thought and action, very open to new ideas and a lover of freedom. They welcome challenges and will not be diverted from their purpose except by their own impatience, which will surface if they don’t get quick results.

Aries subjects are courageous leaders with a genuine concern for those they command, being responsible people, it is rare that they will use their subordinates to obtain their own objectives as leaders, but occasionally it does happen. They do not make very good followers because they are too “take charge”. They may be unwilling to obey or submit to directions for which they can see no reason, or with which they disagree. They are much concerned with self, both positively and negatively – self-reliant but also self centered (sometimes) and concerned with their own personal advancement and physical satisfaction. Their immense energy makes them aggressive and restless, argumentative occasionally, headstrong, quick tempered, easily offended and capable of holding grudges if they feel themselves affronted.

As the first sign in the zodiac, you, as an Arian (as you are referred to), is to simply “get something started and lead the way”. The Sun in this zodiac position gives your will free rein to express itself. You could be doing this in the form of some leadership role, or by forcing others to look at themselves in a new way. You can accomplish this by knowingly carrying out a deliberate act in the name of some cause that moves you. A negative effect of this sun sign is that you could sometimes unknowingly make it hard for others to relate to you, as you really are.

In your personal relationships Arians are frank, direct and candid, and make enthusiastic and generous friends. You are liable to have a high sex drive and make passionate but fastidious lovers. There is, however, a negative side to your associations with other people. You can easily be irritated by slowness or moderation in your companions and, though yourselves sensitive, ride roughshod over the sensitivities of others. The intensity of your sexual urges can drive you to promiscuity and a Don Juan-like counting of conquests of the opposite sex. It can also trick you into early unwise marriage which may end disastrously. Arians are highly devoted to their children, even to the point of laying down their own lives, so that they might live. You will not find a more defensive and loving parent in all the zodiac.

It is preferable to be aware of your pioneering spirit and not disregard it. For in acknowledging it you not only enjoy life more, but you avoid being pushed around by others. Your nature is usually push or be pushed, with little middle ground. This can at times be objectionable to others, but you must have the freedom to act, rather then just thinking about it, getting pent-up in the process. At all costs you need to avoid negative emotions such as resentment, regret and self-pity, for they would deny you what is essential to your nature: straightforwardness.

Mentally Arians are intellectual and objective, but can be in rare situations bigoted and extremist in religion and politics. They are good champions of lost causes and last-ditch resistance. They are quick-witted but sometimes foolhardy and over optimistic, lacking thoroughness and the ability to evaluate difficulties in the undertakings into which they often rush impulsively. The great need of Aries natives is to exercise an iron self-control, to discipline the qualities and tendencies of their character to the advantage, not the detriment, of the society in which they move.

As an Arian, you like a challenge that will stir you to action. This challenge may just be frustration; or at a more controlled level, you may have clear direction and know what or whom you’re fighting for. If your direction is not clear, then ask yourself and listen to your inner voice. You will come up with an answer. An Arian without a direction in which to go, or a without a cause to fight for, would be against your nature and make you more a “sheep” then a ram!

Arian, do not be afraid to be forceful, for this is the very core of your nature. If you feel fear in your heart, then look for a history of negative events in you personal history, such as violence or abuse from others. Being fearful may also indicate a household in childhood that negated independence and personal initiative in you. This could have inhibited your natural urge to go forward into life as the leader and champion you were born to be. Conversely, such bad influences could also have led you to be overly forceful, or to be unsympathetic to your own need and sensitivity.

You make good athletes and climbers, doctors, explorers (of new ideas as well as uncharted territory, the latter in these days including adventuring into outer space), soldiers, sailors and airmen, and leaders, though awkward subordinates, in industry and politics.

Much as you are the Ram, there is still the little lamb in you, which means that at times you would attain your goals more easily by gently giving in without resistance to the demands of a given social situation, rather than getting your horns entangled in something larger and more powerful than yourself. This is a talent akin to knowing the difference between what you can change, and what you cannot. This of course takes patience, the acquiring of which is definitely your greatest achievement, along with your sense of your own inner softness.

Aries governs the head and brain, and Arians are said to be prone to headaches, particularly migraines, sunstroke, neuralgia and depression. Indigestion and nervous disorders are also threats to you, and your rashness, impetuosity and wholesale physical commitment make you liable to accidents and physical injuries.

You like extremes. Physical, emotional and mental, and benefit profoundly by experiencing them; but if your extremism goes too far beyond social acceptability, then expect to be extremely lonely.

Your starstone is the precious Diamond. The diamond is considered the greatest of stones, revered throughout the ages for its great beauty, and strength, and also for its powerful positive spiritual and physical influences. The diamond is said to enhance the wearer with charm and beauty. Physically it strengthens the kidneys and reproductive organs and gives protection in severe disease. The ancient Romans believed that the diamond, when worn on the left arm, next to the skin, would give the wearer bravery and daring. During the Middle Ages Queen Elizabeth I was given a diamond to ward off the plague. (Your Star stone is NOT your birthstone. The vibration of this stone corresponds to the planet or sign. Not to the month in which you were born)