Other Alphabets In Magic

Home » Blog » Book of Shadows » Alphabets » Other Alphabets In Magic 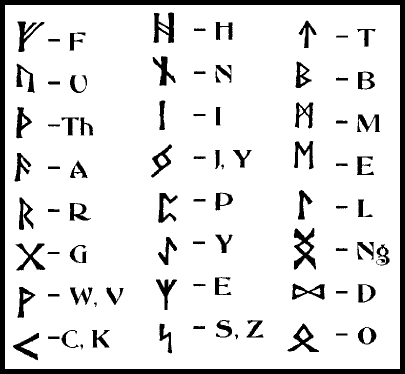 The range of magickal alphabets is as wide as non-magickal ones. Some languages that are widely used are considered magickal in the origins and religious use, such as sanskrit and hebrew. Some are used exclusively as magickal alphabets although they may have been used for other things once upon a time. Such as Ogham and Runic alphabets.The majority of the alphabets are based on English or Hebrew alphabets.

The ancient Egyptians believed that it was important to record and communicate information about religion and government. Thus, they invented written scripts that could be used to record this information.

The most famous of all ancient Egyptian scripts is hieroglyphic. However, throughout three thousand years of ancient Egyptian civilisation, at least three other scripts were used for different purposes. Using these scripts, scribes were able to preserve the beliefs, history and ideas of ancient Egypt in temple and tomb walls and on papyrus scrolls.

In AD 391 the Byzantine Emperor Theodosius I closed all pagan temples throughout the empire. This action terminated a four thousand year old tradition and the message of the ancient Egyptian language was lost for 1500 years. It was not until the discovery of the Rosetta stone and the work of Jean-Francois Champollion (1790-1832) that the Ancient Egyptians awoke from their long slumber. Today, by virtue of the vast quantity of their literature, we know more about Egyptian society than most other ancient cultures.

The script was developed about four thousand years before Christ and there was also a decimal system of numeration up to a million. Unlike other cultures the early picture forms were never discarded or simplified probably because they are so very lovely to look at. Hieroglyphs were called by the Egyptians “the words of God” and were used mainly by the priests. These painstakingly drawn symbols were great for decorating the walls of temples but for conducting day to day business there was another script, known as hieratic This was a handwriting in which the picture signs were abbreviated to the point of abstraction

Hieroglyphs are written in rows or columns and can be read from left to right or from right to left. You can distinguish the direction in which the text is to be read because the human or animal figures always face towards the beginning of the line. Also the upper symbols are read before lower.

Another rather magickal language is that of the travelling romany gypsies. A party of gypsies leaving a site would mark the route at crossroads and junctions to indicate who was in the party and where they were headed. For example a small family group may be represented as a leaf for the caravan with stones to represent the people sticks laid in crosses indicated the direction they came from and where they were headed other messages may be carved on trees or sticks for following groups to find.

As well as writing our intent in magickal alphabets we can also use symbols and witches runes to inscribe our intent. For example if we wanted to use planetary influences of astrological influences we may inscribe candles with those symbols to bring added power to our work.

Consisting of the 9 planetary symbols which include the sun and moon as planets. By using their symbols you can add planetary influences to your spells.

The 12 zodiac signs are very familiar to most people and you may use one or more of these to add astrological influences to your work. You may also choose to represent the person you are working for as their sun-sign of the zodiac.

Scott Cunningham lists several witches runes and symbols in his books “Living Wicca” and “Wicca”. I find these invaluable aids for spell casting. Unfortuneately I am not great at creating pictures on the computer so you will have to get these books for yourself to see his runes. But I asure you that you won’t regret buying these books!

Sigils are images created to represent the intent of a spell. One of the main ways of making sigils is through reduction. You take a sentence that represents your intent and remove all duplicate characters leaving one of each letter. To create the sigil the letters are then blended into one single figure. You can use any of the magickal alphabets to make sigils. Blend them together in whichever way your sub-concious takes you.

We can use magickal alphabets in creating sigils, talismans, and for inscribing candles, writing in our Bos etc. It helps to focus our intent by carefully considering the wording and also makes it less decipherable by unfriendly eyes.You can use other languages for writing spells if you choose however you should only use it if you understand what you are saying or writing you could be causing harm accidentally or more likely reduce your magickal results, by using a language that you do not understand properly. Some paths and traditions like their books and spells written in Latinbut I won’t use it because there is too much room for mistakes,but if you are happy to use it then do just be sure of your wording and your intent. 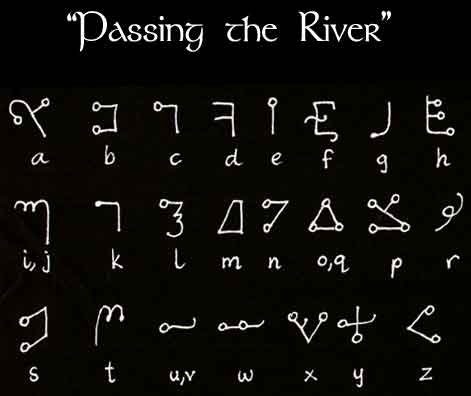 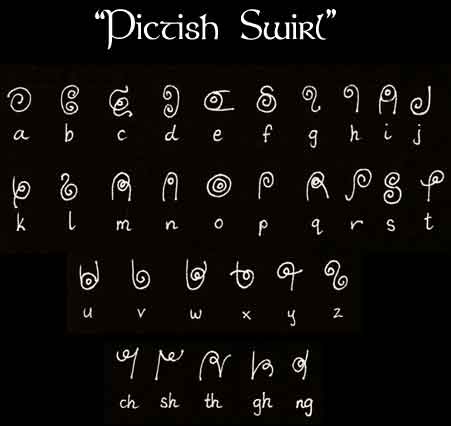 in Italy. The earliest known inscription dates from the middle of the 6th century BC. More than 10,000 Etruscan inscriptions have been found on tombstones, vases, statues, mirrors and jewelry. Fragments of a Etruscan book made of linen have also been found. Most Etruscan inscriptions are written in horizontal lines from left to right, but some are boustrophedon (running alternately left to right then right to left). Used to write: Etruscan, a language spoken by the Etruscans, who lived in Etruria (Tuscany and Umbria) between about the 8th century BC and the 1st century AD. Little is known about the Etruscans or their language.

The Tifinagh or Tifinigh abjad is thought to have derived from the ancient Berber script. [Berbers were mountain people, who lived in northwestern Africa, in what is now Morocco.] The name Tifinagh means ‘the Phoenician letters’, or possibly comes from the Greek word for writing tablet, ‘pínaks’. It is not taught in schools, but is still used occasionally by the Tuareg for private notes, love letters and in decoration. For public purposes, the Arabic alphabet is used.

The Sabaean or Sabaic alphabet is one of the south Arabian alphabets. The oldest known inscriptions in this alphabet date from about 500 BC. Its origins are not known, though one theory is that it developed from the Byblos alphabet. The Sabaean alphabet, like Arabic and Hebrew, includes only consonants. Unlike Arabic and Hebrew, Sabaean has no system for vowel indication. In most inscriptions it is written from right to left, in some it is written in boustrophedon style (alternating right to left and left to right). It was used to write Sabaean, an extinct Semitic language spoken in Saba, the biblical Sheba, in southwestern Arabia. The Sabaeans managed to unite southern Arabia into a single state by the 3rd century AD, but were conquered by the Abyssinians in 525 AD.

Hungarian runes (Székely Rovásírás) are descended from the Kök Turki script used in Central Asia. They were used by the Székler Magyars in Hungary before István, the first Christian king of Hungary, ordered all pre-Christian writings to be destroyed. In remote parts of Transylvania however, the runes were still used up until the 1850s. Hungarian runes were usually written on sticks in boustrophedon style (alternating direction right to left then left to right). The runes include separate letters for all the phonemes of Hungarian and are in this respect better suited to written Hungarian than the Latin alphabet.