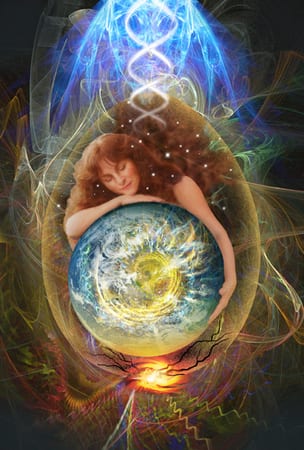 Simply put, alchemy is the art of producing change or transformation. The alchemist uses magic to change something of a lower quality into a substance that’s more purified or perfected. Turning lead into gold is a common image associated with alchemy that symbolizes the transformation process in human consciousness from ignorance to enlightenment.

“A scientist will find alchemy of interest as a form of early chemistry, the psychologist will see it as a way of mapping the human psyche through symbolic descriptions, and the mystic will interpret it as a quest for divine knowledge.” — Cherry Gilchrist, The Elements of Alchemy

Alchemy dates back at least 2,000 years and is linked with Asian, Arabic, and Western mystery schools. Like many occult traditions, its origins aren’t clear, and its present-day expressions are varied. Ancient Chinese alchemists focused on the secrets of longevity, whereas the Greeks and Romans showed more concern for the chemical aspects of the art. During the Renaissance, the Rosicrucians and other mystical orders helped to blend alchemy’s philosophy into other branches of learning.

Producing the Philosopher’s Stone is alchemy’s objective. Although the stone is said to be a substance similar to gold and to possess its own powers to effect transformation, the term doesn’t refer only to a physical object. Combining, distilling, and transmuting physical substances through chemical processes symbolizes the process of spiritual transformation; the metals used represent the human qualities being perfected. By blending internal and external alchemy, the alchemists believed immortality could be achieved.