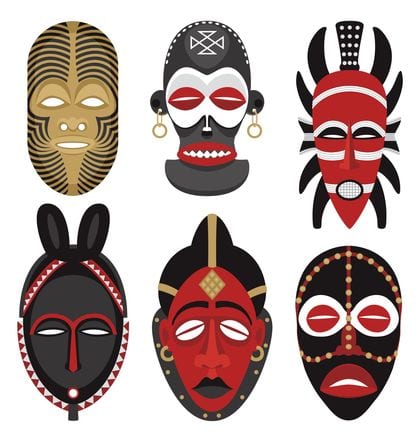 Attempting to analyze religions across the vast continent of Africa is a daunting task. The second largest continent in the world after Asia, Africa contains more than fifty countries. It possesses amazing geographical variation and cultural diversity. Each of its countries has its own history, ethnic group, and language. Many of the religious beliefs, customs, and rites evolved due to the environment in which the followers were born, grew up, and survived.

There is no single body of religious dogma for the continent, yet many similarities are found among all the countries. The simple common denominator is the belief in a single god or creator who is somewhere else. Even though in some instances there is a collection of gods, there is usually one supreme god who has domain over all. These other spiritual beings can be nature spirits and ancestors and are often called the Children of God. Sacrifices to lesser spiritual beings go to the Supreme Being. Many of the religious groups in various parts of the continent are on the decline.

The largest religious influence in Africa has been Islam, which came first to North Africa. Islam spread early on along the Mediterranean shores from Egypt to Morocco. Islamization of African was well advanced by the ninth century; Muslim dynasties were established in West Africa as early as the eleventh century in Takrur and Kanem.

By the nineteenth century, Muslim mysticism — Sufism — was of considerable influence in Saharan and Sudanic Islam. Closely associated with Sufism in sub-Saharan Africa was the veneration of the Wali, the holy men of Islam, and the influence of the Muslim healing arts such as Quranic erasures and protective amulets, ornaments worn as a charm against evil.

The Arabs then brought the faith into the Sahara, where it was embraced by many western Africans.

People often mistakenly think of African religions as being exclusively concerned with animism, sorcery, and various tribal rituals. First, one has to consider that Africa is virtually divided in two at the Sahara Desert. (It is cut almost equally in two by the equator, meaning it is bound in the north by the tropic of Cancer and in the south by the tropic of Capricorn.) Islam took hold in the north; Christianity at one time was in the Sudan, and it’s still active in Ethiopia, which is the only African kingdom with a Christian state church. Christian missions have spread throughout most of the areas south of the Sahara.

In the dense tropical forests, ancient traditional beliefs are still active, except where missionary zeal has made a presence in a country. In those cases, the majority of people have followed the customs and beliefs of the imported religion. Even so, it is highly probable that there has been an intermingling of the traditional with the new.

The Rituals of African Religions

There is a common thread in the rituals throughout Africa. This is especially true with those concerned with progress throughout life.

An expectant mother is an important person. As in the United States a child may grow up to be president, in Africa a male child may grow up to be a chief. The actual birth rarely takes place in the presence of a man. The child is anointed by a priest. Naming the child is very important and usually consists of a given name, followed by the name of the father, then the grand-father’s name. After the ceremony, there will be songs, dancing, and a feast.

Both circumcisions and clitoridectomies are performed. The justification for what some people call genital mutilation is that it is an important means of establishing gender — that there should be no indication of androgyny. Boys often have their faces painted in preparation for the coming-of-age rite of circumcision.

A woman who is to be married is very powerful. For one, she may give birth to a warrior or chief. In some areas, after the wedding has been planned, the groom’s family must move to the bride’s village. Gifts will be exchanged and in some cultures, an offering is made to the gods. Sometimes a sacrifice will be made, too.

The actual wedding ceremony will include both families, and sometimes the entire village. Not surprisingly, there will be much celebration. For several weeks after the consummation of the marriage, the couple will continue their celebrations.

Death is not seen as the final stage of life, but as going to a place to be with deceased loved ones. The corpse is cleaned and dressed, then placed in the grave with special artifacts to aid in the journey. The corpse will be buried, and afterward there may be an exchange of gifts between family members and an animal sacrifice.

Some tribes initiate girls in what we in the west would call domestic science. This even extends to sexual etiquette and the religious significance of womanhood and female power. Boys may be led by the wise men in the village to a specially secluded place and stay there for up to a year while they learn secret information about becoming a man.

African religious beliefs and customs have traveled, particularly to the United States, where elements of the indigenous faiths have frequently remained and/or been absorbed into the local religions. The lasting picture of religion in Africa is one of amazing historical development, as rituals and customs from ancient times have continued into the twenty-first century and commingled with a variety of imported religions.

Religion has always played a major part in the different cultures in Africa. Each locale has many varied stories that tie them directly to either a god or the gods they worshipped  However, there is a strong similarity to the stories. First, the god would create the earth, then the animals, and lastly the humans.

Because of the lack of a written language, very little written religious history is available. Most of what is known came in two ways: orally, from parents to children; and the results gathered from the extensive work of archeologists, which revealed a tremendous body of evidence not only of religious practices and ways of life but also how those lives evolved over the years. The traditions were so strong that today’s religious practices provide valuable insight into the way they were practiced years ago.

In the Central African Republic, about two-fifths of the population is Christian, mainly Roman Catholics plus some Protestant denominations. Sunni Muslims are a growing minority. The remainder are either adherents of traditional religions or have no religious affiliations.

Common ground among African religions include a cosmos that is populated by divine beings, the existence of sacred places and spaces (for instance a mountain that a god or sacred spirit inhabits), a notion that males and females are both parts of the cosmic scheme, and the idea that society was organized around the values and traditions from early beginnings. Africans have taken strong steps over the years to stave off the influences of foreigners onto existing traditions and beliefs in an effort to preserve indigenous cultures. These efforts have not always been successful.

Many scholars believe that the African countries that have remained most stable into the twenty-first century are those that retained their traditional ways of life and religions. African religions don’t have a dogma consisting of strict religious laws to follow; their entire philosophy is directed to nurturing a proper relationship with the divine and how the divine relates to the earth, life, and community. Their rituals revolve around establishing and maintaining a relationship with the spiritual forces in nature and with the gods. This relationship is accomplished through prayers, offerings, and sacrifices made to shrines and altars.

How many religions are there in Africa?
No one knows for sure. Africa is a veritable hub for missionaries. Thus, in addition to the traditional beliefs and independent churches, the Roman Catholic Church made inroads, as did the Baptists and other Protestant denominations. The Ethiopian church, formed in 1892, had connections with the African Methodist Episcopal Church in the United States.

A sacrifice often means the shedding of blood; the ritual of sacrifice releases the vital force that sustains life. In some parts of Africa, a blood sacrifice must be made to the gods. Nowadays animals are sacrificed, though it wasn’t always that way. Typically, a goat or chicken is consecrated, ritually slain, and then either burnt or buried — it’s never eaten as a meal by the devotees. The purpose of many sacrifices is to assuage the wrath of the gods, which can be exhibited by drought, pestilence, epidemic, famine, or other dire happenings.

The shrines are unimposing edifices — insubstantial little structures placed wherever it seems appropriate; they don’t even have to be permanent. Ancestors play an important part in the beliefs, acting as the go-betweens for spiritual access. People don’t automatically become ancestors when they die. First, they need to have lived a good life — a moral life that has contributed to the community. When a person gets seriously ill, the cause is some kind of emotional or social conflict, and it is the ancestor, who has been watching over the person, who delivers the reprimand of illness.