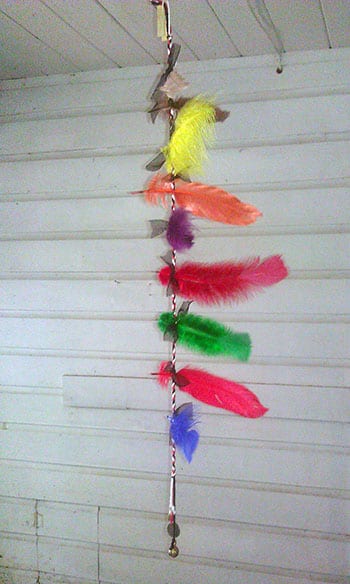 Knot magick (also called cord magick) is a form of spellwork that is less well-known than some others, but is no less powerful.

Witches Ladders are used for spell binding. They bind the spell that it won’t go off course or simply fizzle out before the spell has acheived its aim. Witches ladders are similar to a catholic rosary or buddist mala. Witches would construct their ladders and then chant over it to manifest desires. There are two ways to manifacture a witches ladder. One is to tie nine knots in a cord chanting incantations as you tie each knot, this binds the spell intention into the cord and eventually into reality.

Another way is to weave three threads together, while chanting over them, once the ladder is formed the witch can either keep it hidden, burn it or bury it depending on what the spell calls for. To undo the spell the witch would undo the knot and then cast the cord into a natural body of running water preferably a river or stream. More advanced witches ladders would have items bound into the cord for added power in that spells intent. Familiars charms, feathers, gemstones and plant materials would all be appropriate. This is a powerful tool that can be added to many spells or rituals.

You can dedicate a piece of rope to magic. Following the same lunar pattern as for candle magic, each night tie one knot in the rope while strongly visualising what you wish to achieve.

Witches’ ladders have a long tradition in Cornwall, where they were commonly sold to fishermen before a trip out to sea. This was called Buying the Wind. Untying the first knot would unleash a light breeze, the second a stronger wind and so on.

A Witch’s Ladder makes a great homemade and inexpensive surprise present for the Pagans on your gift list. Traditionally made with three cords of different colours and braided together, the feathers of nine separate species of birds are then added, each tied on while chanting an appropriate rhyme. The completed Ladder is then hung from the highest point in the home for good luck. Instead of feathers (most wild bird feathers are illegal to use in the U.S. except by special permit), modern Pagans often scour the flea markets and antique marts for old charm bracelets. Then nine (or more) charms holding special significance to the maker or recipient are sewn onto the cords. Small bells, seashells, twigs from the nine sacred woods or little herb bags can also be used.

It is always surprising to see many Pagan homes with lots of dreamcatchers and pentacles, but no Witches’ Ladders. But then again, while some sources say that the Ladder should be placed in a spot where you can see it every day, others may be more traditional and keep theirs hidden in a secret spot. House protection magick was very much a part of Folk Magic in Britain and elsewhere. Witches’ Ladders can be a nice alternative. As with all magickal items, when it comes time to retire or replace them, it is wise to burn them, bury them or throw them into deep running water.

The only material you need to perform a knot spell is a cord of some kind. Anything will do, but make sure it is long enough to hold all your knots and the material of the cord should be natural. Craft shops are great sources for lengths of cord made from silk, cotton, hemp, leather, wool or even ribbon. Choose a colour to match the intention of the spell.

You can use your cord as-is, but to add more of your personal energy to the spell, you can also braid it before working the knots. Obviously, the material needs to be fairly thin or the resulting cord will be too thick to hold the knots. You can combine colours too, to more finely tune the colour energy to your needs.

Make sure you have a sufficient length of material, as it will shorten up considerably when braided. Focus on your purpose as you braid your cord. Once you have your cord ready, it’s time to make the spell. Any purpose can be used with cord magick, but spells that involve binding are more appropriate. I don’t mean binding of another person necessarily, but any kind of ‘tying up’ or ‘holding fast’. Some examples might be: spells to eliminate bad habits, to help keep emotions in check, to bind up an illness, or to secure a new job.

A typical or traditional knot spell has nine knots, and the words spoken are shown below. You concentrate and focus your energy on your purpose, and repeat each line as you tie each knot. But you could also choose a number of knots to match your purpose (numerologically speaking), and you can recite your own words as well.

Your magick will continue to work as long as the knots are tied. Once your goal has manifested itself, you should dispose of the cord without untying the knots. Burning or burying it are two options, so long as your cord is made from natural materials. You could also just keep the knotted cord tucked safely away.

Cord magic requires you to charge each knot with your energy and can be used for any situation you wish. For example, for healing, keep the cord with you until the spell is complete. For negativity, bury or put away the cord after completion of the spell.

In a quiet place, light two candles of the appropriate colour and incense. Place the cord (13 inches) in the middle of the candles. Relax. Make the sign of the pentacle and say:

Gracious Lady, I ask that you bless this cord as I perform this rite.

Concentrate on the goal, then say: