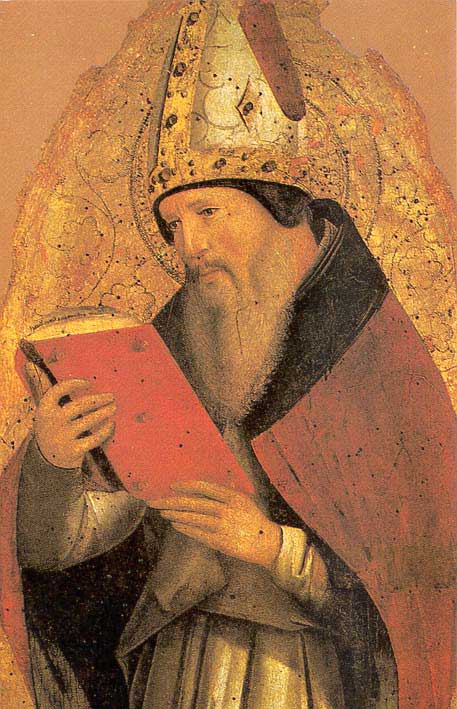 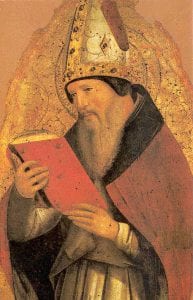 Augustine may be the first philosopher to frame the problem of evil and address it in a formal way. He uses the Platonic division of a sensible realm and a realm of ideas to provide the metaphysical under pinnings for his answer to that problem.

When he was a young man, Augustine’s Christian ideas seemed inadequate to him. He was flummoxed by the ever-present problem of moral evil. The Christians said that God is the creator of all things and that God is good. How, then, is it possible for evil to arise out of a world that a perfectly good God had created? Because the young Augustine could not find an answer to this question, he turned away from Christianity.

Breaking it down further, if God is all-knowing, he knows how to stop evil. If he is all-powerful, he can stop evil. Finally, if he’s all good, he cares to stop evil. Why then is there evil in the world? In his response to this ponderous problem, Augustine revealed his Platonic influence.

St. Augustine (354–430) thought that human beings were morally responsible for those evils resulting from the misuse of their own wills. In The Enchiridion on Faith, Hope, and Love, he wrote “… The turning of the will from God is without doubt a sin, we cannot say, can we, that God is the cause of sin?” Augustine’s defense of God allowing man free will has been called “the free will defense” of human sin.

There are two parts to Augustine’s doctrine on the will. One part is that the universe itself is the result of God’s free and sovereign will in making it. With respect to humanity, everything is to be explained on the basis of the will. Augustine was unlike the Greeks in thinking that will and not the faculty of reason is primary. The intellect follows the will, not the other way around. But what determines the will to act as it does? Augustine, a libertarian on the matter, contended that nothing determined the will; the will is completely free. He argued that if one stone is pulled out from under another, the one on top drops to the earth. The stone of course has no will and succumbs to gravity. But people are not stones and their spirits are not forced in one direction or another.

Augustine thought that natural evils — including disasters such as hurricanes and tornadoes and the like that can raze villages and end people’s lives — did not result from God’s agency either. To explain how natural evils occurred, Augustine returned to Plato’s thinking. In this world of changes — what Plato called a world of “becoming” — change gives rise to natural processes. Matter is evil and is subject to change and these changes give rise to famines, diseases, plagues, and so on, which in turn give rise to human suffering. From Plotinus, Augustine acquired the idea that evil is not a positive reality but a privation — that is, the absence of good. The world is imperfect, but this does not reflect on God by implying that He is imperfect or responsible for the imperfections of the world.