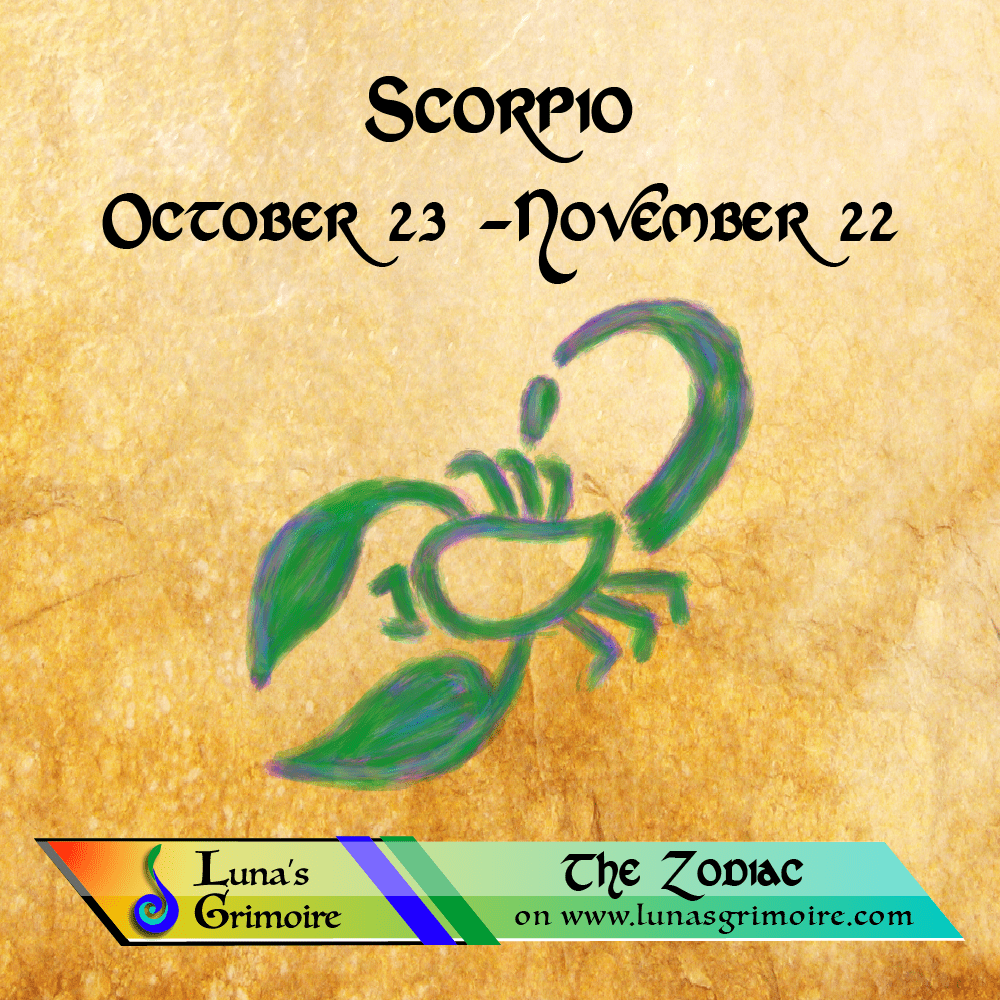 Scorpios of the zodiac are the most intense, profound, powerful characters in the zodiac. Even when they appear self-controlled and calm there is a seething intensity of emotional energy under the placid exterior. They are like the volcano not far under the surface of a calm sea, it may burst into eruption at any moment. But those of us who are particularly perceptive will be aware of the harnessed aggression, the immense forcefulness, magnetic intensity, and often strangely hypnotic personality under the tranquil, but watchful composure of Scorpio. In conventional social gatherings they are pleasant to be with, thoughtful in conversation, dignified, and reserved, yet affable and courteous; they sometimes possess penetrating eyes which make their shyer companions feel naked and defenseless before them.

In their everyday behavior they give the appearance of being withdrawn from the center of activity, yet those who know them will recognize the watchfulness that is part of their character. They need great self-discipline, because they are able to recognize the qualities in themselves that make them different from other humans, and to know their utterly conventional natures can be used for great good, or great evil. Their tenacity and willpower are immense, their depth of character and passionate conviction overwhelming, yet they are deeply sensitive and easily moved by their emotions. Their sensitivity, together with a propensity for extreme likes and dislikes make them easily hurt, quick to detect insult or injury to themselves (often when none is intended) and easily aroused to ferocious anger. This may express itself in such destructive speech or action that they make lifelong enemies by their outspokenness, for they find it difficult not to be overly critical of anything or anyone to whom they take a dislike.

They can harness their abundant energy constructively, tempering their self-confidence with shrewdness and their ambition with magnanimity toward others provided they like them. They relate to fellow workers only as leaders and can be blunt to those they dislike to the point of cruelty. In fact they are not above expressing vindictiveness in deliberate cruelty. They are too demanding, too unforgiving of faults in others, perhaps because they are not aware of the shortcomings within themselves, and extravagantly express their self-disgust in unreasonable resentment against their fellows. They do, however, make excellent friends, provided that their companions do nothing to impugn the honor of which Scorpios are very jealous. Part of the negative side of the Scorpio nature is a tendency to discard friends once they cease to be useful, but the decent native is aware of, and fights this tendency.

They are fortunate in that their strong reasoning powers are tempered with imagination and intuition, and these gifts, together with critical perception and analytical capacity, can enable the Scorpions to penetrate to profundities beyond the average. They have a better chance of becoming geniuses than the natives of any other sign.But charismatic “twice-born” characters such as they can sink into the extremes of depravity if they take the wrong path, and the intensity of their nature exaggerates their harmful tendencies into vices far greater than the normal.

Rebelliousness against all conventions, political extremism to the point where hatred of the Establishment makes them utterly unscrupulous terrorists. Brooding resentment, aggressive and sadistic brutality, total arrogance, morbid jealousy, extreme volatility of temperament, these are some of their vices. At the other extreme is the procrastinator, the man or woman who is capable of so much that they do nothing and become indolent and self-indulgent, requiring extravagant praise and flattery from those whom they make their cronies.

Being so gifted, they can find fulfillment in many employments. Their inner intensity can result in the ice-cold self-control and detachment of the surgeon, the concentration of the research scientist, and the heroism of the soldier. Any profession in which analysis, investigation, research, dealing with practicalities, and the solving of mysteries are relevant, can appeal to them. So police and detective work, espionage and counterespionage, the law, physics or psychology may attract them, and they can become masters of the written and spoken word. They may be most persuasive orators and find fulfillment as diplomats or preachers and, if they make the Church their profession, their inner intensity can express itself in the spiritual fervor of the mystic or the thaumaturgy.

Scorpio is the symbol of sex and Scorpios are passionate lovers, the most sensually energetic of all the signs. For them, union with the beloved is a sacrament, an “outward and visible sign of an inward and spiritual grace.”. Their overriding urge in loving is to use their power to penetrate beyond themselves and to lose themselves sexually in their partners in an almost mystical ecstasy, thus discovering the meaning of that union which is greater than individuality, and is a marriage of the spirit as well as of flesh. They are thus capable of the greatest heights of passionate transport, but debauchery and perversion are always dangers, and Scorpios can become sadistic monsters of sensuality and eroticism. Their feelings are so intense that even when their love is of the highest, and most idealistic kind, they are nevertheless frequently protagonists in tragic, even violent romances, “star-crossed lovers”.

Scorpio governs the pelvis and reproductive and urinary systems and its subjects are said to be prone to ailments of the liver and kidneys, stones and gravel in the bladder or genitals, and other genital ills such as priapism. Abscesses, boils, carbuncles, fistulas, piles, ruptures and ulcers may also affect the Scorpions.

Your Starstone is OPAL. Mysterious Opals contain the wonders of the skies – sparkling rainbows, fireworks, and lightning, shifting and moving in their depths. Opal has been treasured throughout history all around the world. Archaeologist Louis Leakey found six-thousand year old Opal artifacts in a cave in Kenya! It is an old myth that anyone who does not have the opal as a starstone will be the receivers of bad luck should they choose to wear it.