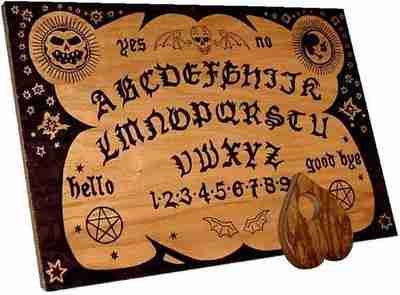 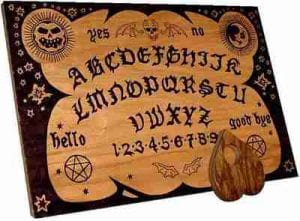 The Ouija Board has been around since the time of the Roman Emperor Valens in the fourth century. It is also thought to have been used by the Greeks since before the time of Christ.

The modern Ouija Board is the combination of two tools used for scrying. The first is a wheel made up of the letters of the alphabet. The second is a glass, usually a wine glass which is inverted and placed in the middle.

The letters are usually written on small pieces of paper which are placed in a circle around the table.

It was in 1891 that a patent was granted to Elijah J Bond on the first modern Ouija Board. The following year the rights to the Ouija Board were purchased by William Fuld.

The name Ouija means yes-yes. In 1966 the Parker Brothers purchased the rights to the Ouija Board and shifted its manufacturing facilities to Salem, Massachusetts. “Ouija” is a registered trademark. There are several theories about the origin of the term “Ouija”. According to one of these, the word is derived from the French “oui” (for “yes”) and the German/Dutch “ja” (also for “yes”). An alternative story suggests that the name was revealed to inventor Charles Kennard during a Ouija séance and was claimed to be an Ancient Egyptian word meaning “good luck.”.

The Ouija Board ended up outselling the game of Monopoly in its first full year at Salem. Over two million copies of the Ouija Board were shipped.

The layout of the Ouija Board seems to vary from country to country. The original and best layout appears to be to place the yes at the top of the circle and the no at the bottom.

The letters are placed in a circle starting with the letter A next to the word yes and continuing around until the final letter Z ends up on the other side of the word yes. The nine numbers from one to nine should be placed at the bottom next to the no.

The Ouija Board usually requires a minimum of two people to operate it. It is very rare that one person has the power to operate the board.

The two people should sit opposite each other and place the tip of only one finger on the glass. The fingertip should only gently touch the glass.

Someone starts by asking a simple question, such as ” is there a spirit present?”. If there is no response the question should continued to be asked.

The glass eventually moves and answers the question. The first time you use a OUIJA BOARD is quite startling.

Sometimes someone will deliberately push the glass but this is easy to spot. The glass tends to move in jerks rather than free flowing.

There are stories that Ouija Boards are dangerous to use. These stories are stupid and should be ignored.

It is helpful to write down the questions you wish to ask before you start. It is also helpful to have a third person writing down the answers as you go for future reference.

Once you become experienced at the Ouija Board you will find the pace of responses coming from the glass will increase. In fact sometimes the glass will speed across the table at such great speeds it is almost impossible to keep up.

It should be noted that sometimes the communication will be in foreign languages or sometimes it is English backwards. My advise to most people is to make their own Ouija Board.

This is simple to do and most effective. Just have a smooth table to work from and cut up small pieces of paper to write on. Any glass will do, though a wine glass is most effective.

The big question many people ask me about the Ouija Board is if they are truey making contact with spirits and the answer is probably. It should be noted that when people are blindfolded, the Ouija board operators are unable to produce any sort of intelligible messages. Psychologists believe the motion of the planchette on the Ouija board is explained by the ideomotor effect.

Ouija Board Trivia
Alice Cooper claims that an Ouija Board suggested that he was the reincarnation of a 17th century witch with the name Alice Cooper, and thus the band’s name “Alice Cooper”.

Aleister Crowley advocated the use of Ouija boards, and they played a major role in many of his magical workings.

Poet James Merrill used a Ouija board for years, and even encouraged entrance of spirits into his body. He wrote the poem The Changing Light at Sandover with the help of a Ouija board. Before he died, he recommended people not to use the Ouija board.

In the early 1900s, St. Louis housewife Pearl Curran used her Ouija board communications with the ubiquitous spirit Patience Worth to publish a number of poems and prose. Pearl claimed that all of the writings came to her through séances, which she allowed the public to attend. In 1917 writer Emily G. Hutchings believed she had communicated with and written a book dictated by Mark Twain from her Ouija board. Twain’s living descendants went to court to halt publication of the book that was later determined to be so poorly written that it could not have been written by Twain dead or alive.