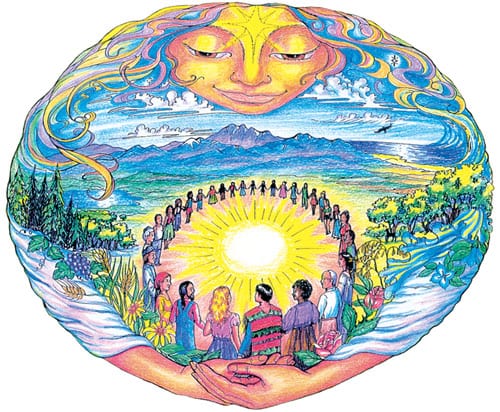 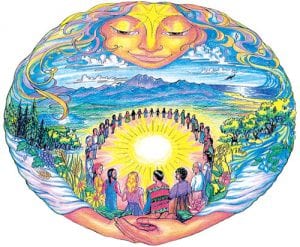 Unlike most traditional religions, the New Age movement lacks an organized base; rather, it is a network of people owning different spiritual approaches to life. Many New Age followers belong an existing religion, with the New Age philosophy as an adjunct to their central beliefs. Other members have discarded the religion they were born into in favor of a more free-flowing, nondogmatic belief.

New Age spirituality has no holy text, clergy, or creed. While there are no sermons preached, followers and nonfollowers alike attend seminars on various aspects of New Age philosophy. The meeting place might be a New Age bookshop that sells a wide variety of books on the subject. However, the movement did set up communities, often called communes, where members follow the lifestyle.

There are no reliable demographics on how many people actually practice New Age philosophy. However, the indications are that far more women than men embrace the movement, and that the majority of the followers are Caucasian.

The movement came about in the 1970s and was strongly influenced by Eastern religions and philosophy (particularly Buddhism and Hinduism), Western psychology, Carl Jung’s teachings and his concept of the collective unconscious, and Native American beliefs and rituals. With the advances in science, the belief also included a pseudoscientific association with an interpretation of quantum physics.

Adopting beliefs from various sources and integrating them into the New Age movement gives an indication of the motivation of the movement — a search for a new paradigm. While not a registered religion, it is certainly a spiritual movement, a veritable mélange of beliefs borrowed from existing faiths. Its development is linked to the social changes that preceded it — for instance the Beat generation, the Hippie culture of the 1960s, and the anti-Vietnam War groups. Its rise might owe in large part to the general disillusionment of many people within the established churches and governments.

New Age followers were looking for a New World Order that would produce an end to wars, famine, pollution, poverty, and discrimination. The new order would usher in what was termed “the dawning of The Age of Aquarius.” The Age of Aquarius was based on the belief that a new sign of the zodiac came along every 2,000 years. The previous sign was Pisces, the fish, which came at the time a new religion called Christianity was emerging. Interestingly, the symbol of the fish indicates Christianity.

The central belief of the movement is that the universe and all that exists within it are one interdependent whole. This means that every existing entity, from atom to galaxy, is rooted in the same universal, lifecreating reality. All people, whatever their race, creed, sex, caste, or color, are invited to participate as individuals or within collective environments that share in these basic beliefs and understandings. The movement claims that it imposes no dogmas, but points toward the source of unity beyond all differences — devotion to truth, love for all living things, and commitment to a life without personal judgment of others.

Attached to the expressed philosophy of the movement are a number of esoteric practices, some of which have strong health applications, including:

There are countless other therapies and techniques aimed at improving health and/or mental equilibrium. Obviously, many of the practices and ingredients used present a wonderful opportunity for the skeptics. Nevertheless, the placebo effect some people obtain from them can’t be discounted.

The New Age movement has no holy writings, but a few books among thousands of New Age books have made a lasting impression on many followers. The first of eight books by the same author came out in the late 1960s — The Teachings of Don Juan: A Yaqui Way of Knowledge became a cult book. People who have read it say it transformed them and became their manifesto. The author, Carlos Castaneda, is a former anthropologist who became a sorcerer’s apprentice, psychic visionary, and original philosopher.

A nonprofit organization founded in 1978 established a networking center for a Course in Miracles students. They publish a periodical called The Holy Encounter and offer free services for students of the course to help them connect with others and understand and integrate the principles into their lives. The entire publication is written to express a nonsectarian, nondenominational spirituality.

The second book, created by Dr. Helen Schucman, is a series of workbooks collectively called A Course in Miracles. She claimed the words came through a process of inner dictation directly from Jesus. It is described as a Christian-based interpretation of the Bible. The book states that, “its goal for you is happiness and peace.” The book offers a one-year training program; it begins with the process of changing the student’s mind and perception. According to the preface, “at the end, the reader is left in the hands of his or her own internal teacher, who will direct all subsequent learning as he sees fit.”

The third set of publications is the Conversations with God series written by Neale Donald Walsch. The content of all three books is the author’s conversations with God. According to the record, Mr. Walsch called out in anguish, “What does it take to make life work? And what have I done to deserve a life of such continuing struggle?” His questions kept coming and he wrote them down on a yellow legal pad; the list ended up looking like an angry letter to God. Then, he heard a reply in his mind coming from a voiceless voice, a voice Mr. Walsch felt very strongly was that of God, who said, “Do you really want an answer to all these questions or are you just venting?” That was the start of it all.

Recently, German-born spiritualist Ulrich Leonard Tolle, commonly known as Eckhart Tolle, has developed a personal growth/self-help philosophy that might be classed New Age. One of Tolle’s teachings asserts that before we can become immersed in the present we have to dis-identify ourselves from thoughts of the past; our preoccupation with our own egos keeps us from being in the present. His latest book is A New Earth: Awakening to Life’s Purpose.