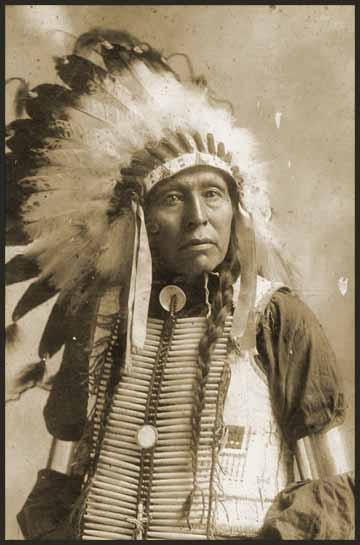 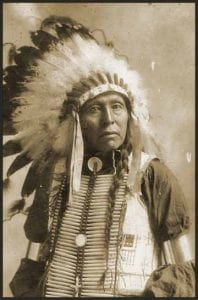 It is almost impossible to characterize Native American religions as a whole because of their amazing diversity. Knowledge about the development of religion in the Native American tribes is imprecise. In fact, the word “religion” had no equivalent in any of the 300 Native American languages that existed at the time Columbus arrived on the continent.

The Lakota were nomadic, equestrian plains Indians who hunted buffalo and lived in tepees. They became famous for destroying Custer’s forces at the Battle of the Little Bighorn in 1876. They followed the Seven Sacred Rites: the sweat lodge, the vision quest, ghost keeping, the sun dance, the making of relatives, puberty ceremony, and throwing the ball. With the exception of throwing the ball, which has been replaced by a practice known as yuwibi, all are still used in worship.

Their origins have been traced back some 60,000 years, but there is little in the way of early written material to provide reliable data. The various teachings, ways of life, and stories were passed on orally with all the drawbacks that are inherent in that form of communication, becoming tainted and more unreliable with each telling. There are common elements, though. Religions (used here in the sense that the immigrant Christians and Roman Catholics knew) were closely related to the natural world, which included supernatural and sacred spiritual worship and power.

The Influence of Outside Forces

The invasion of settlers from Europe during the nineteenth century wrecked the existing customs of the native people. Whole ways of life were radically changed, destroyed, or lost. For instance, during the Gold Rush days in California, in spite of the treaties made by the federal government providing clearly defined reservations, the miners would hold “Sunday shoots,” where crowds of whites would attack Indian villages and kill as many people as they could. Entire tribes were massacred.

Christianity was frequently forced on the natives, with reprisals if it wasn’t embraced. Although some of the natives accepted the religion voluntarily, many may have acquiesced for the sake of expediency: become a Christian and survive. Once the threat of physical survival disappeared there was a melding of beliefs, as happened with many other religions that came under the power of an invader. Thus, the beliefs in fixed doctrines, sacred texts, and moral codes and customs that were part of the European religious system were adopted by Native Americans and made part of their beliefs and values.

Individual beliefs were peculiar to individual tribes. Without becoming overly simplistic, generalities can be found across the diverse religions that existed. The knowledge of past information was passed on verbally from one generation to the next. Tradition, therefore, was a vital element specific to each tribe.

Many tribes would actually record events. The known method was using a specially prepared buffalo hide. Each year a figure or symbol illustrating the most memorable event would be painted on the hide. In time, the hide would become filled and it would be maintained for as long as there were people who could remember what the figures and symbols meant. For one year, there might have been a very good harvest of berries; in another the tribe might have moved to another location.

The Apache occupied the southwestern part of the United States. They embraced the concept of supernatural power and carried out shamanistic ceremonies. Four is a sacred number; their songs and prayers occurred in quartets. Rites lasted for four successive nights. Their lifecycle rites included the rite for a child’s first steps and a girl’s puberty rite.

Since there was a limit on the amount of material that could be painted on any one hide, oral communication was the standard method of passing on stories, customs, and rituals. There might be a ceremony where these teachings were told to the other members of the tribe, particularly the young. No doubt the recounting of the exploits of local warrior heroes was popular.

In the belief system there was one great advantage in not having a tribal religion: there was no controversy between competing beliefs or religious schisms within groups/tribes, as was common among established religions. The geographical vastness of the country and the sparse population also played a role.

The Native American Church, which became institutionalized in the twentieth century, has accepted some of Christianity’s beliefs and has spread from coast to coast. The church includes some 100,000 adherentsfrom over fifty North American Indian tribes, including American Indians and Eskimos. In some instances, traditional languages have been incorporated into Christian worship. It has received government support, particularly in the establishment of Indian schools.

The church is also known as Peyote Religion. “Peyotism” is based on the use of mescal, which is obtained from peyote cactus; eating it produces hallucinogenic effects. The drug was originally used for medicinal purposes and (occasionally) during warfare for divination.

Peyotism was especially popular among the disenfranchised, culminating in 1918 in the Native American Church. This cult would combine such indigenous elements as drumming, singing, visions, and the use of the sacred pipe with Christian practices of healing, prayer, and the chewing and sacramental eating of the non-narcotic hallucinogenic buds of the peyote plant in Saturday all-night rites. The rites occurred around an earthen altar and sacred fire in a peyote house or tipi, followed by a communal breakfast on Sunday morning.

The church’s ethics include brotherly love, family care and support, and the avoidance of alcohol. Peyote produces visions during trance states, which were part of a Ghost Dance. Songs were sung, and the person in the trance might have a vision of an eagle or crow guiding her to the world of the dead. Part of the Ghost Dance provided information about the traditional culture the individual sought to retrieve.

Aside from peyote’s purported hallucinogenic powers was its ability to bring peace and healing. In addition, it was an antidote against alcoholism and provided visions of the Peyote Spirit, often understood as Jesus. The false labeling of peyote as a narcotic led to its banning by tribal councils, missionaries, and government. Peyote was used extensively throughout many of the tribes; in 1997, the Native American Church estimated that there were about 225,000 adherents.

The majority of Native American rituals revolved around the calendar and lunar and solar observations. Others were allied to the various subsistence needs; for example, hunting and harvesting. The Native American environment was symbolized by the ritual of the six directions: north, south, east, west, the zenith, and the nadir. The zenith was Grandfather (day). Sky is represented by Father Sun and the Thunderbirds. The nadir is Mother or Grandmother Earth. Grandmother Moon was female.

The Navajo live on the Navajo nation, a reservation in northern Arizona and New Mexico. They believe in powerful holy people, with whom they can live harmoniously. Twenty-four Navajo chants have been identified. One of the central chants is the Navajo creation myth that recounts what happened after their emergence on earth.

Different tribes had different rituals; nevertheless, the principle throughout the majority of the tribes was closely tied to nature and existence. For instance, the spirits and power of mountains, springs, lakes, clouds, flora, and fauna were seen as sacred.

The sweat lodge, fasting, and the sun dance were all part of Native American rituals. A sweat lodge is a structure made from saplings and covered by animal skins that generates moist air, like a sauna. There is a depression dug in the center of the lodge where hot rocks are placed. Water is thrown over the rocks, creating steam. Sweat lodges vary in size; some can hold as many as a dozen people. The purpose is for purification or spiritual renewal.

Fasting rituals are self-explanatory, but the sun dance is spectacular. A religious ceremony that originated with the Plains Indians, most notably the Sioux, the Sun Dance was held once a year in the early summer to celebrate and reaffirm beliefs about the universe and the supernatural.

Sometimes the dance was performed by individual tribes; other times a group of them would come together. There were elaborate preparations, and once the Sun Dance was under way, it continued for several days and nights. Dancers didn’t eat or drink during the dance and many ended up in a frenzy of exhaustion; some even indulged in self-torture and mutilation. In 1904, the U.S. government outlawed the Sun Dance. Some tribes have tried to revive the dance in its original form.

Birth, marriage, and death do not fit into a universal set of beliefs and rites. The various rites are meant to be indulged in by the relatives and the community. However, death is considered a transition, and many outcomes are possible following death. Some believe in reincarnation, others that humans return as ghosts, and others that the spirit goes to another world.

Many Native Americans still cling to and express the values and traditions they were taught by their forefathers. Tribes of Native Americans continue their legal measures to reclaim lands they feel they have title to. Original languages are virtually extinct, but the Native American Church and its congregations are endeavoring to keep them alive and to re-establish a culture that has been virtually destroyed by its invaders.