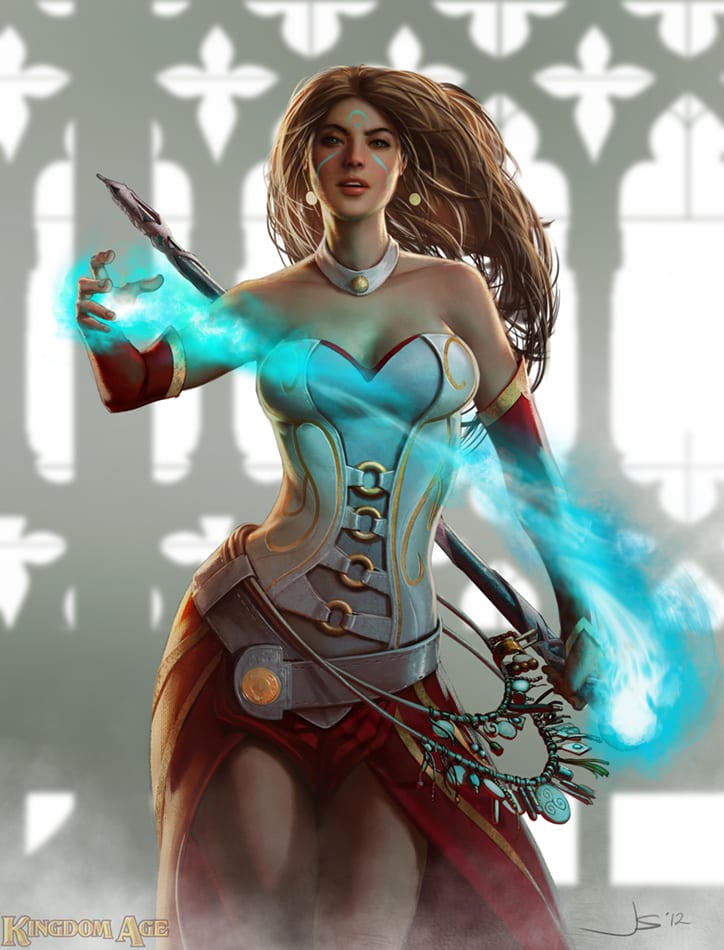 The art of subtle domination of the environment and one’s surroundings is summed most perfectly in the art of Magecraft. The Mage is a highly intelligent, peaceful, mentally focussed individual who seeks the purest forms of control over themself, their surroundings, the people they meet, and the beings they come into contact with (a mage must be mentally calm, collected, and have a mind free from distraction, as an angry, vengeful, confused, or otherwise highly emotional person cannot properly concentrate). Everything aspect of life that concerns a Mage from day to day is domineered so that the Mage is always in total control. Magecraft, as a whole art, consists essentially of Psychism and Temporal Magic (Psionics).

The highly psychic nature of a Mage lends itself well to being developed into a finely tuned art. To sway living beings, a Mage must learn to impose his/her will with care. Usually, what a Mage does, is to begin with becoming one with their environment so as to distinguish between “noise” and thoughts. This will be discussed at length later on, so I will leave the detailed explanation until then. After a Mage has become accustomed to their environment, a Psychic Thread is opened between the Mage and the Target. This is often seen, with the inner vision of a Magician, as a yellow-blue thread of light which extends from the Third Eye of the Mage, to the equivalent of their target. This is not strictly the colour you must see, if you see anything at all, but is often reported as the most common image. The opening of a psychic thread allows the Mage to listen to thoughts, perhaps more in the form of empathy, in most cases, see past thoughts and to insert notions of their own directly into the mind of their target. This does not mean the target will suddenly stop and drone “Yes, Master?”, but that third-party influence is possible. The pure energy of a psychic link is a phenominal experience, and not one that is soon forgotten. At first it may be hard to link with another sentient being, and it may feel as though only the surface of the targets mind is being penetrated. It is a fine way to start. A Mage will know the instant a truly powerful psychic link is formed. It is like having lived two lifetimes, and instantaneously feeling overwhelmed, elated and very God-like. Once the newness of the linking sensation has subsided, the Mage can then concentrate and will find that their own thoughts can quickly and simply become the thoughts of their target, if circumstances permit. This is because of the highly focussed energy that is supporting the psychic bridge. With the ability to read and write thoughts, so to speak, comes a new paradigm for the Psi Mage. In one respect, it is the call to honour. Having such power, misusing it is very easy. In another, it is a call to wariness. Having the power to influence a mind makes humans seem like large computer disks, in one sense, and freely manipulable. Take care and remember this: When the two minds are linked, the mage can not escape the effects given to a target entirely. The Ripple Effect comes into play, in this case, and reminds us that telepathic links are intimate and intense. Ruining the mind of a target can also adversely affect the mind of the linked mage.

When considering the use of these telepathic energies, many supposed possibilities present themself. Not the least of these possibilities which first jump to mind is sex, mind-invasion, and emotion draining. Remember the first caveat presented on this page, though?” a mage must be mentally calm, collected, and have a mind free from distraction, as an angry, vengeful, confused, or otherwise highly emotional person cannot properly concentrate” were the exact words, and are also the very reason that all of the above options are none too wise (or even possible). Maintaining the crystal sharpness of a psi-prepared mind will take all the wits of a mage. Things that will make the mind stray are out of the question during practice — a fact which must always be taken into consideration. Because of this, though, energy “gathering” such as prescribed on the Beginning pages may become tedious or hindering. Mages tend to prefer the alterative “nexus” approach right from the outset, as it creates a continuous and sustainable pattern that the brain may more easily follow. One way to use these energies would be used to open a channel between the caster and the target and to turn themself into an ethereal flywheel. The minds of the caster and target(s) then, with each spell casting, continuously feeds a Mage so that energy is not spent on the casting of the spell itself, but rather only in the spells initiation. After that point, telepathic power is assumed to be equally distributed. A link between the Mage and the environment is opened with energy, like most other castes, but is maintained through the “nexus” method. The Mage filters emotion, stray thought, or whatever else might be available through the linking of minds and may be able to interpret what is being received, to some degree. In this fashion, a passive acceptance of foreign thought is received and the spell can continue (as long as the required concentration level is maintained). It can hardly be stressed enough to be sure to learn your limits and never attempt to push things too far or too fast. The best approach to linking of this nature is passive reception instead of trying to force information out of people. Take things slowly, as a precaution, and do not try to probe the secrets of the world in one day. Empathy and telepathy are two means of learning through others, and of encouraging decisions with a mental nudge in accordance with the desires of the mage. Examples of this kind of control are seen in stories and legends of mages with soothing and strangely persuasive voices throughout the history of magic which have used this kind of control to their advantage as opportunities came about. This is not the end of a mage’s ability, though. The last thing a Mage does is Temporal Magic, which is better known as Psionics.

Temporal Magic is also known as “Psionics”. As the name implies, these spells have no lasting effect but rather are used for unreal pseudo-results over a limited time span. These types of spells are mostly different species of hallucination or mind trick played intentionally to make reality distort itself for a person over a short span of time. In this sense, Psionic power is the ability to make one thing seem like another, and to shift what appears to be real into another form. It should be noted that these are not actual changes in reality but rather, as consistent to the art of the psi mage, are temporary changes of perception. In this branch of psi magecraft comes the occult artform of illusions. Impressions of reality which can be transferred from mage to subject allows for mistakes of perception and seeming distortions more likely, with varying benefits or drawbacks.

Magecraft is a powerful art but, above all other caster types, requires a great deal of mental control and concentration.