It's in the Cards and the Stars

Home It's in the Cards and the Stars 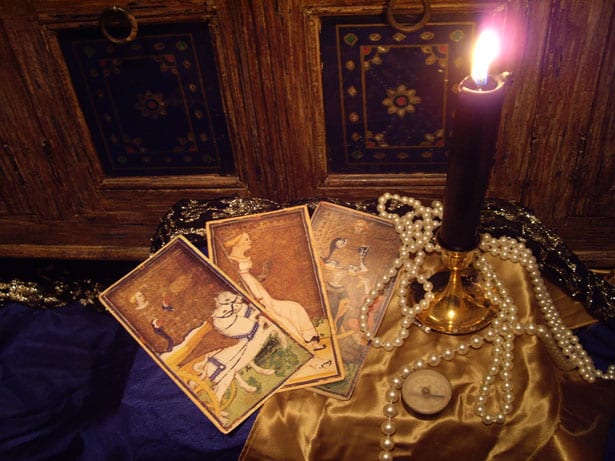 Psychic powers may be used in divining the future. In this chapter, you will get an introduction to two of the most common forms of divination — the Tarot and astrology. Try your hand at these two methods, and see if either one feels right for you. The knowledge and wisdom you can get by relying on Tarot and astrology can help you as you progress through your life map.

The Origins of Tarot

Even though symbols used in tarot cards may have come to us from the ancient cultures of Egypt, Greece, Rome, and China, the origins of the Tarot deck and its use in divination are much more recent. According to the International Tarot Society, Tarot comes from northern Italy, where it was introduced sometime between 1420 and 1440. At first, the Tarot was just a new type of card game, similar to bridge, which was played by the upper class in Italy and France.

The tarot cards were handcrafted and elaborately illustrated. As the game became more popular and spread, each artist would add to or change the illustrations according to his cultural interests. Today, early tarot decks are highly prized by collectors because these works of art are windows through which you can view the history of the time period when the cards were made.

Tarot and the Occult

Although a witchcraft trial in Venice in 1589 may be seen as an indication that Tarot was used in divination, it wasn’t until the 1700s that these cards generally became associated with occultism. Antoine Court de Gébelin (1725–1784), a Swiss pastor who became involved in matters of the occult, came to believe that the roots of Tarot extended all the way back to ancient Egypt and that the tarot symbols contained secret knowledge that had long since been forgotten. Gébelin’s ideas were embraced by Jean-Baptiste Alliette (1738–1791), who maintained that the cards were somehow connected to mystical ideas found in the Book of Thoth.

What is the Book of Thoth?
The Book of Thoth is a mystical book attributed to the Egyptian god Thoth, the inventor of writing, who was believed to have known the secrets of the Universe. It is said that forty-two of his books are still buried in the Hall of Records, physically located somewhere under the Sphinx.
Another hundred years passed, and in the 1850s French occultist Alphouse Louis Constant, writing under the name of Eliphas Levi, linked tarot cards to the teachings of Jewish mysticism, or the Kaballah. Constant, who was a priest and a Rosicrucian, believed that Tarot was also related to the Bible.

Then in 1909, the Order of the Golden Dawn, a hermetic society that studied divination and magic, commissioned A. E. Waite to create a tarot deck using Golden Dawn’s special symbolism. That deck, now known as the Waite-Smith set, has continued to be the most widely used in the United States, although there are many different styles on the market as well. (This chapter will refer to the Waite-Smith set. If you would like to use an alternate set, the interpretations for each card may not apply.)

A. E. Waite standardized the tarot deck to include seventy-eight cards, divided into the Major Arcana and Minor Arcana. The Major Arcana is comprised of twenty-two thematic trump cards that represent archetypal forces in your life. With the exception of the Fool, each card in the Major Arcana is assigned a number. The Minor Arcana includes fifty-six cards subdivided into four suits: cups, swords, wands, and pentacles (originally, wands were polo sticks and pentacles were coins). Each of the suits contains ace through ten, plus page, knight, queen, and king. The cards of the Minor Arcana can help you focus on your direction in your life journey.

Tarot is no longer played like a game of cards. The deck is now mainly used as a tool to forecast the future. At first, learning to read the Tarot may seem like an insurmountable task. That’s why there are professional readers who can interpret the cards for you. The reader’s job is really to help you become aware of your life’s direction and of the positive and negative outcomes as you continue your journey.

If you decide that you want to use the Tarot to enhance your psychic abilities, you should try different decks to see which one feels right for you. It may be that you relate to particular images, or perhaps you’ll get certain psychic sensory clues that are evoked by a certain sense. Consider your other spiritual interests — you may relate to nature, to particular symbols, or to Native American imagery. What you are looking for is a set that will resonate with your psyche.

When you receive a Tarot reading from a psychic, the cards themselves act as tools to help the reader create intuitive images that relate to your life. The psychic may get internal information from his or her guidance system in one or more of the five senses.

The Roots of Astrology

Man has been fascinated with the world beyond from the first time he looked up to the heavens. We know that astronomers charted the stars of the night sky some 4,000 years before Christ was born. The Great Pyramids and the Sphinx of Giza in Egypt line up with three stars in Orion’s Belt, as it appeared more than 12,000 years ago. The Mayans of Central America also developed astrological charts to help them predict the future.

Many now believe that the three wise men who followed the stars to Bethlehem on the night of Jesus Christ’s birth were in fact astrologers. The Greek scientist Ptolemy believed that the sun, moon, and planets affect human beings and events as they move through the heavens. However, in A.D. 333, Emperor Constantine declared astrology to be the work of demons and condemned the practice.

Nostradamus used astrology when he made predictions that are still being studied today. Carl Jung consulted astrological charts to help him understand his patients. His writing on the subject helped bring it back into the public spotlight in the twentieth century. More than one psychic predicted the assassination of John F. Kennedy using astrological charts. And there was much public uproar when people heard that Nancy Reagan had consulted an astrologer to help advise her husband, President Ronald Reagan.

Astrology is a form of divination. It is based on the belief that the movement of celestial bodies affects human potential and other events on earth just as the moon directly influences the rise and fall of the ocean tides. Over the years, elaborate systems have been developed to correlate predictions of future events through the movement of these heavenly bodies. More than one system of astrology has developed. For instance, Chinese astrology is based on the phases of the moon.

Astrology is a complex science and can require time and study to master, and there are many resources you can rely on if you choose. The objective of this chapter is to relate how astrology may be used as a part of your psychic development. You will be given a brief explanation of some of the symbolism that is a part of astrology.

The most popular type of astrology today relies on the position of the sun at the time of birth to predict events in each person’s future as well.

Through the course of the year, the sun travels through twelve houses of the zodiac:

Each of the twelve signs has its own personality traits. Since you were born under a specific sign, you are expected to exhibit the personality traits of that sign. As you delve into the science of astrology, you will read about personality profiles and compatibility of the different birth signs. If you have a strong relationship with someone who has an incompatible birth sign, remember that you can help make the relationship better. Don’t just abandon it.

Each of the astrological signs contains one of four elements. These elements are fire (Aries, Leo, and Sagittarius), air (Gemini, Libra, and Aquarius), water (Cancer, Scorpio, and Pisces), and earth (Taurus, Virgo, and Capricorn).

Now that you’ve had a brief introduction to astrology, you might ask how it fits into your psychic development. Your intuition can play a big part in the way you interpret your birth chart. So the first step is to find a competent astrologer who will provide you with your personal horoscope and who will help you understand what it means. If your astrologer is also a psychic, she will be able to use her astrological knowledge in conjunction with psychic powers, such as clairvoyance, to see into your future and identify potential problems and potential opportunities.

With today’s technology, it is possible to make yourself an astrological chart on your computer — all you need to do is purchase the software. The Internet is also a major source for information on astrology.

A Reading of Your Birth Chart

You can use your own psychic ability to help you interpret your own birth chart. The proper way to prepare yourself is to balance and ground yourself in the peaceful and loving light of the Universe before you begin. You may ask your internal and external guides to help you.

Just as you have learned to access your intuitive mind, prepare yourself to do the same when you examine the information in your birth chart. Using your five senses, ask your Belief to receive the right images in your mind to help you understand your positive potentials. Now as you consider what you read or are told about yourself and your future, let your internal and external guidance systems provide you with the correct responses to help guide you.

The science of astrology, combined with psychic interpretations of your horoscope, can be a powerful tool to help you through your life journey. You are the one who can best understand how to work with your birth chart. Your psychic intuition is good, and it will help you as you travel along your journey.