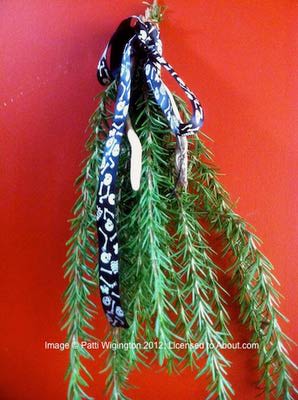 In many agricultural societies, it was well known that certain herbs kept certain things out of one’s house. Gather some of your favorite herbs from the garden – or go wildcrafting – and tie them together with some ribbon. Hang them on the door or near windows for a variety of magical purposes:

Apple: Hang apple branches and blossoms from your walls or windows for love magic. In Celtic myth, an apple branch bearing grown fruit, flowers, and unopened bud was a magical key to the land of the Underworld. It’s also a symbol of the harvest, and is frequently found on altars during Mabon celebrations.

Chamomile: Chamomile is known as an herb of purification and protection, and can be used in the bedroom to bring about restful sleep and meditation. Hang it on your door to ward against psychic or magical attack. If you’re a gambler, use chamomile to ensure good luck at the gaming tables. In a number of folk magic traditions, particularly those of the American south, chamomile is known as a lucky flower.

Hyssop: Hyssop can rid a house of negativity. It’s also good for use in magical self-defense — hang a bundle on the door, or spread it around the perimeter of your property to add a layer of magical protection.

Lavender: Magically speaking, lavender is often associated with love spells, as well as for workings to bring calmness and peace. To bring love your way, hang stalks of it around your home. To get a good night’s sleep, with calming dreams, hang a bundle of lavender near your bed. It can also be used in a purifying bath or smudging ritual.

Patchouli: There are some traditions of modern magic in which patchouli is valued for its repelling power. If you can find patchouli branches, bundle them on your doors or windows to keep negative influences at bay or for magical self-defense.

Pennyroyal: Pennyroyal is well known as a magical herb. In some traditions it’s associated with money, while in others Pennyroyal is connected to strength and protection. In Hoodoo and some forms of American folk magic, Pennyroyal is used to ward off the “evil eye” – hang a bundle on your front door to keep hostile forces at bay, or to avoid a hex or curse.

Rosemary: Roman priests used rosemary as incense in religious ceremonies, and many cultures considered it a herb to use as protection from evil spirits and witches. In England, it was burned in the homes of those who had died from illness, and placed on coffins before the grave was filled with dirt.  For magical use, hang rosemary to rid a home of negative energy, or use as an incense while you meditate. Hang bundles on your front door to keep harmful people, like burglars, from entering.

Sage: Sage has long been burned to purify and cleanse a space. The ancients burned dried sprigs of sage in temples and during religious rituals. The Greeks and Romans wrote that the smoke imparted wisdom and mental acuity. In the tenth century, Arab physicians said that sage brought about immortality, or at the very least, a long and healthy life. In England, seventeenth-century servants of the royal family scattered a blend of sage and lavender on the floors at court to help disguise the aroma of day to day life. [About.com]