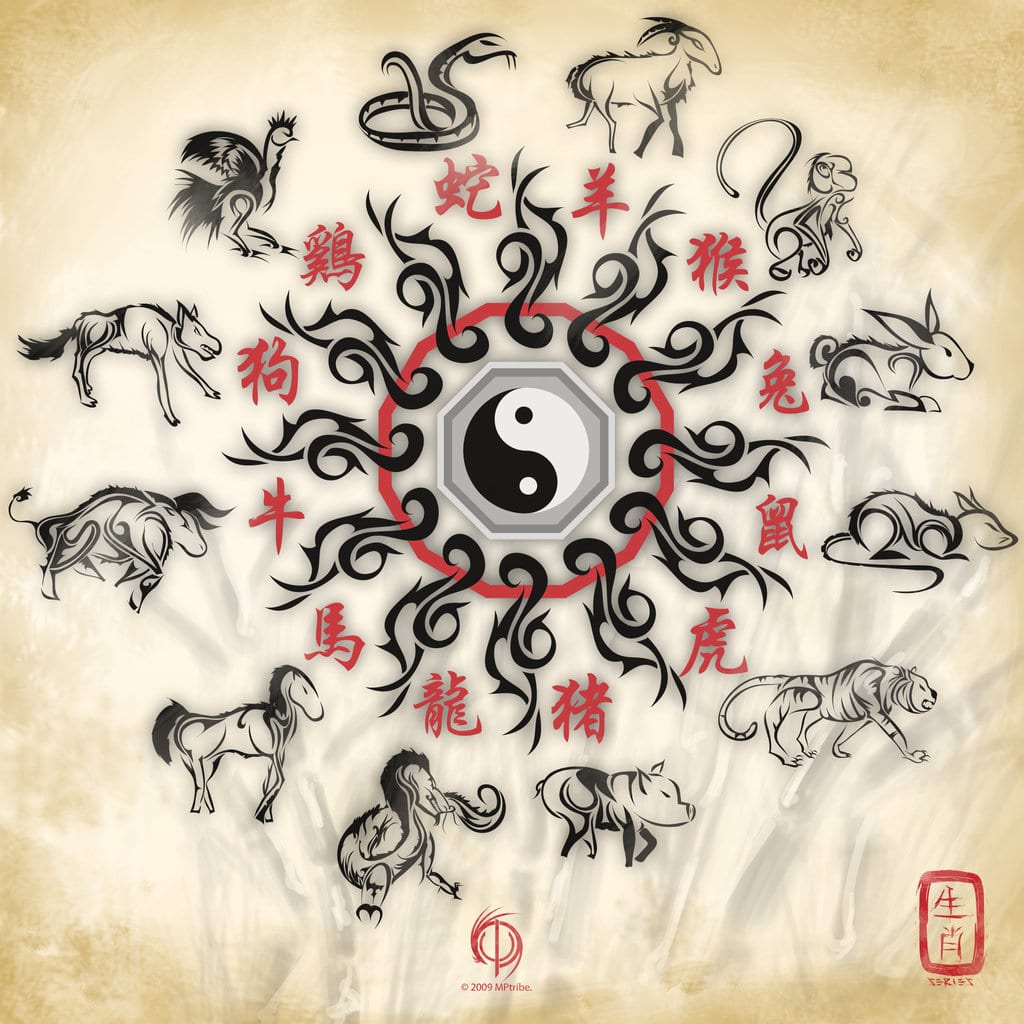 The hours – the secret animals in Chinese Astrology:
The Chinese zodiac is also used to label times of day, with each sign corresponding to a “large-hour”, which is a two-hour period (24 divided by 12 animals). It is therefore important to know the exact time of birth to determine it. The secret animal is thought to be a person’s truest representation, since this animal is determined by the smallest denominator: a person’s birth hour. As this sign is based on the position of the sun in the sky and not the time of your local clock, it is important to compensate of daylight savings time. However, some online systems already compensate for daylight savings time, and astrologers may compensate your time for you oblivious to the fact that you’ve compensated it yourself, leading to an inaccurate reading. The large-hour in which a person is born is their secret animal. It is a person’s own true sign which their personality is based on. Note that while this chart is quite accurate, the exact time at which each animal begins shifts by the day.

Categorizations of the twelve signs in Chinese Astrology:

The First Trine in Chinese Astrology:
The first trine consists of the Rat, Dragon, and Monkey. These three signs are intense and powerful individuals, capable of great good or great evil. They make great leaders, but the three have different approaches. Rats and Dragons have a tendency to be quite dictatorial and autocratic, whilst Monkeys are more diplomatic. Frustrated when hampered, these signs are ruled by highly potent energy and unpredictability. They are intelligent, magnanimous, charismatic, charming, authoritative, confident, eloquent and artistic. They can also be tyrannical, bombastic, prejudiced, deceitful, imperious, ruthless, power-hungry, and megalomaniacal.

The Second Trine in Chinese Astrology:
The second trine consists of the Ox, Snake, and Rooster. These three soul mates conquer life through endurance, application, and slow accumulation of energy. Although each sign is fixed and rigid in opinions and views, they are genius in the art of meticulous planning. They are hardworking, discreet, modest, industrious, charitable, loyal, punctual, philosophical, patient, and good-hearted individuals with high moral standards. They can also be self-righteous, vain, critical, judgmental, unimaginative, narrow-minded, petty, and pessimistic.

The Third Trine in Chinese Astrology:
The third trine consists of the Tiger, Horse, and Dog. These three signs seek one another, and are like-minded in their pursuit of humanitarian causes. Each is a gifted orator and excels at verbal communication. Relationships and personal contact are of highest priority and each one seek their intimate soul mate. Idealistic and impulsive, the Tiger, Horse and Dog follow the beat of their own drummer. Defiant against injustice, these three signs wilt without large amounts of physical affection and loyal support for causes. They are productive, enthusiastic, independent, engaging, dynamic, and honourable. They can also be rash, rebellious, quarrelsome, hot-headed, reckless, anxious, moody, disagreeable, stubborn, and selfish.

The Fourth Trine in Chinese Astrology:
The fourth trine consists of the Rabbit, Sheep and Pig. The quest for these three signs is the aesthetic and beautiful in life. Their calm nature gives them great leadership abilities. They are artistic, refined, intuitive, and well-mannered. These souls love the preliminaries in love, and are fine artists in their lovemaking. The Rabbit, Sheep and Pig have been bestowed with calmer natures than the other 9 signs. These three are compassionately aware, yet detached and resigned to their condition. They seek beauty and a sensitive lover. They are caring, unique, self-sacrificing, obliging, sensible, creative, emphatic, tactful, and prudent. They can also be naive, pedantic, insecure, cunning, indecisive, and pessimistic.

Origins of the Chinese Zodiac in Chinese Astrology:
According to one legend, in the sixth century B.C. the Jade Emperor invited all the animals in creation to a race, only twelve showed up: the Rat, Ox, Tiger, Rabbit, Dragon, Snake, Horse, Lamb, Monkey, Cock, Dog, and Pig, and according to their places in the race, the Jade Emperor had given them each a number starting with the Rat who was the winner of the race. Many legends arose from the Race of the Chinese Zodiacs. One told of the reason why cats and rats shall always be enemies: He and the cat (at the time good friends) were poor swimmers, so they asked the ox if they could stay on top of his head to cross the river. Along the way he pushed the cat off of the ox’s back. And the cat, incapable of swimming, lagged behind. The rat stayed on top of the ox’s head until the ox was almost at the finish line. And as the ox was about to cross it, the rat jumped from the ox’s head and became first place. And the cat and rat have been enemies ever since. Another legend tells that the cat had asked the rat to wake him up the day of the Race. The rat agreed, but on the said day, he did not wake the cat in his greed to win. When the cat finally woke up and got to the racing ground, he found the race to be over. The cat then swore revenge upon the rat. The legend of the Zodiac Race, of course, is by far the least credible of all explanations of the origin of the Chinese zodiac. Because the “twelve earthly branches” which correspond with the zodiac, was already in existence as early as the Zhou era, long before the advent of Buddhism. A parallel decimal set of symbols called “ten heavenly stems”, corresponding with yin-yang dualism and the five elements (wood, fire, earth, metal, water) was in existence in the Shang dynasty as the stems were part of Shang rulers’ names. The Zodiac, or the “twelve earthly branches” is probably devised together with the ten heavenly stems. As a duodecimal numeral system, the twelve earthly branches is probably evidence for trade between early tribes that later contributed to the Chinese civilization on the one hand, and the Mesopotamian civilization, which perfected duodecimal arithmetics, on the other. The Chinese zodiac, though not entirely identical with the Greek zodiac, nonetheless shares with it the duodecimal system and the idea of using animals as numerical symbols. This is a hint for the triangular relations between early Chinese, Mesopotamian and Greek cultures. When the Bulgars, an early Turkic tribe within the Hun tribal federation that invaded Europe at the end of the Roman Empire, brought with them the very same Chinese zodiac. This is a probability that the Chinese zodiac is of northern Chinese origin, commonly shared among Altaic and northern Chinese tribes. However, nowadays the Thai and Tibetans use the same zodiac with slight modification, probably due to millennia of contact with the Chinese civilization.

Chinese zodiac in other countries:
The Chinese zodiac signs are also used by cultures other than Chinese. For one example, they usually appear on Japanese New Year’s cards and stamps. The United States Postal Service and those of several other countries issue a “Year of the _____” postage stamp each year to honor this Chinese heritage. However, those unfamiliar with the use of the Chinese lunar calendar usually just assume that the signs switch over on Jan 1 of each year. Those who are serious about the fortune telling aspect of the signs can consult a table, such as the one above. The Chinese zodiac is also used in some other Asian countries that have been under the cultural influence of China. However, some of the animals in the Zodiac may differ by country.

Turkic people:
The European Huns used the Chinese Zodiac complete with “dragon”, “pig”. This common Chinese-Turkic Zodiac was in use in Balkan Bulgaria well into the Bulgars’ adoption of Slavic language and Orthodox Christianity. Following is the Hunnish or Turkic Bulgarian Pagan zodiac calendar, distinctive from the Greek zodiac but much in conformity with the Chinese one:

History Of Chinese Astrology
Chinese Astrology is more than 2,000 years old. Originally, astrology and astronomy were inseparable. Practitioners were always present as officials of the imperial court. Astrology was also used to show what would even happen to a nation. By the time of the Tand Dynasty (618-907) a whole encyclopedia had been written about how to give astrology readings for people. Astrology was always traditionally regarded very highly in China, and indeed Confucius is said to have treated astrology with respect saying: “Heaven sends down its good or evil symbols and wise men act accordingly”. The 60 year cycle combining the five elements with the twelve animal signs of the zodiac has been documented in China since at least the time of the Shang (Shing or Yin) dynasty (ca 1766BC – CA 1050BC). Oracles bones have been found dating from that period with the date according to the 60 year cycle inscribed on them, along with the name of the diviner and the topic being divined about. One of the most famous astrologers in China was Tsou Yen who lived in around 300 BC, and who wrote: “When some new dynasty is going to arise, heaven exhibits auspicious signs for the people”.

Year Of The Rat
The Year of the Rat in Chinese Astrology.

Unfortunately, as soon as the Rat earns money, they spend it.