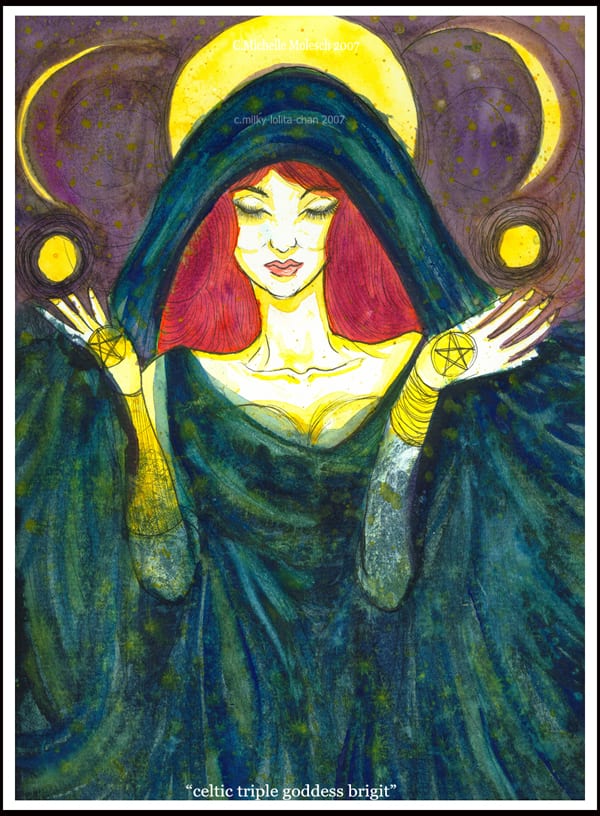 The Celtic pantheon is known from a variety of sources such as written Celtic mythology, ancient places of worship, statues, engravings, cult objects, and place or personal names.

Celtic deities can fall under two categories; general deities and local deities. “General deities” were known by Celts throughout large regions, and are the gods and goddesses invoked for protection, healing, luck, and honour. The “local deities” were the spirits of a particular feature of the landscape, such as mountains, trees, or rivers, and thus were generally only known by the locals in the surrounding areas.

After Celtic lands became Christianised, there were attempts by Christian writers to euhemerise or even demonise the pre-Christian deities. For example, the Tuatha Dé Danann of Irish mythological sources have commonly been interpreted to be a divine pantheon, despite certain redactors’ interjecting that the Tuatha Dé Danann were merely mortals, or else that they were demons.

Here you will find a list of Celtic Gods and Goddesses:

Angus of the Brugh
Also OENGUS OF THE BRUIG God of youth, son of the Dagda. In Ireland, Angus is the counterpart of

Cupid. Angus’ kisses turn into singing birds, and the music he plays irresistably draws all who

Arainrhod
“Silver Wheel,” “High Fruitful Mother.” One of the Three Virgins of

Britain,her palace is Caer Arianrhod, the Celtic name for the Aurora Borealis.

Babd
A goddess of war. One of a triad of war goddesses known collectively as the Morrigan. Bird shaped and crimson mouthed, Badb useshermagic to decide battles. Badb lusts after men and is oftenseen at fords washing the armor and weapons of men about to die in combat.

Brighid
also BRIGIT. Goddess of healing and craftsmanship, especially metalwork. Also a patron of learning and poetry. In Wales she is Caridwen, who possesses the cauldronof

knowledge and inspiration. The

Celts so loved Brighid that they could not abandon her even when they became Christians, and so made Brighid a Christian saint.

Cernunnos
Horned god of virility. Cernunnos wears the torc (neck-ring) and is ever in the company of a ram-headed serpent and a stag. Extremely popular among the Celts, the Druids encouraged the worship

to replace the plethora of local deities and spirits with a national religion. The Celts were so enamored of Cernunnos that his cult was a serious obstacle to the spread of Christianity.

Cerridwen
also HEN WEN; in Wales, BRIGHID.  “White Grain,” “Old White One.” Corn goddess. Mother of Taliesen, greatest and wisest of all the bards, and therefore a patron of poets. The”white

of Robert Graves. Caridwen lives among the stars in the land of Caer Sidi. Caridwen is connected with wolves, and some claim her cult dates to the neolithic era.

Dagda
Earth and father god. Dagda possesses a bottomless cauldron of plenty and rules the seasons with the music of his harp. With his mighty club Dagda can slay nine men with a single blow, and with

can bring them back to life. On the day of the New Year, Dagda mates with the raven goddess of the Morrigan who while making love straddles a river with one foot on each bank. A slightly comical figure.

Danu
Mother goddess, an aspect of the Great Mother. Another of a triad of war goddesses known collectively as the Morrigan. Connected with themoon

goddess Aine of Knockaine, who protects crops and

cattle. Most importantly, the mother of the Tuatha de’ Danann, the tribe of the gods.

Dian Cecht
A healer. At the second battle of Moytura, Dian Cecht murdered his own son whose skill in healing endangered his father’s reputation. The Judgments of Dian Cecht, an ancient Irish legal tract,

down the obligations to the ill and injured. An aggressor must pay for curing anyone he has injured, and the severity of any wound, even the smallest, is measured in grains of corn.

Dis Pater
Originally a god of death and the underworld, later the cheif god of the Gauls. The Gauls

believed, as their Druids taught, that Dis Pater is the ancestor of all the Gauls.

and cattle as well. Donn’s descendents come to his island after death.

Celtic horsemanship, took up the worship of Epona themselves and eventually imported

her cult to Rome itself.

Esus
A god of the Gauls “whose shrines make men shudder,” according to a Roman poet. Human sacrifices to Esuswere

hanged and run through with a sword. For unknown reasons, Esus is usually portrayed

Govannon
The smith god. The weapons Govannon makes are unfailing in their aim and deadliness, the armor unfailing in its protection. Also a

healer. Those who attend the feast of

Govannon and drink of the god’s sacred cup need no longer fear old age and infirmity.

Lug
also LUGH, LLEU. A sun god and a hero god, young, strong, radiant with hair of gold, master of all arts, skills and crafts. One day Lug arrived at the court of the Dagda and demanded to be admitted

place among the deities, eventually leading them to victory in the second battle of Moytura against the Formorian invaders. (The Formorians were a race of monsters who challenged the gods for supremacy in the first and second battles of Moytura.) The Romans identified Lug with Mercury. The most popular and widely worshipped of the Celtic gods, Lug’s name in its various forms was taken by the cities of Lyons, Loudun, Laon, Leon, Lieden, Leignitz, Carlisle and Vienna.

Macha
“Crow.” The third of the triad of war goddesses known as the Morrigan, Macha feeds

Medb
“Drunk Woman.” A goddess of war, not one of the Morrigan. Where the Morrigan use magic, Medb wields a weapon herself. The sight

of Medb blinds enemies, and she runs faster than the fastest

Nuada
also NUD, NODENS, LUD. “Nuadhu of the silver arm.” God of healing and water; his name suggests “wealth-bringer” and “cloud-maker.” At the first battle of Moytura, Nuadhu lost an arm,

and Dian Cecht replaced it with a new one made

out of silver. Because of this, Nuadhu was obliged to turn leadership of the Tuatha de’ Dannan over to Lug. People came to be healed at Nuadhu’s temple at Lydney, and small votive limbs made of silver have been found there.

to the ears of his eager followers.

Sucellus
Guardian of forests, patron of agriculture. His consort is Nantosvelta, whose name suggests

brooks and streams. Sometimes considered synonymous with Cernunnos or Daghda.

The Morrigan
also MORRIGU MORRIGAN. A war goddess, forerunner of the Arthurian Morgan La Fey. Like Odin, fickle and unfaithful, not to be trusted. A hag with a demonic laugh, the Morrigan appears

apparition to men about to die in battle. Her name is also used for a triad of war goddesses, who are often thought of as different aspects of the Morrigan.