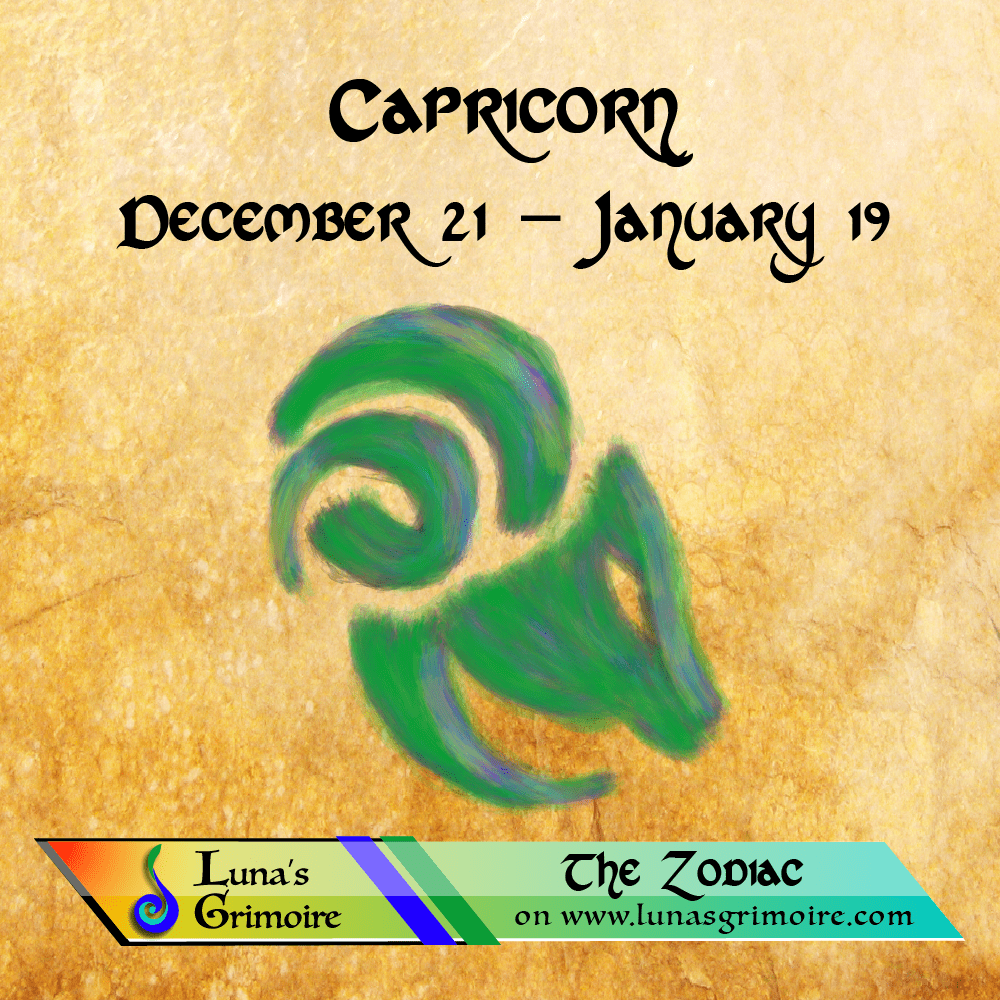 The sign Capricorn is one of the most stable and (mostly) serious of the zodiacal types. These independent, rocklike characters have many sterling qualities. They are normally confident, strong willed and calm. These hardworking, unemotional, shrewd, practical, responsible, persevering, and cautious to the extreme persons, are capable of persisting for as long as is necessary to accomplish a goal they have set for themselves. Capricorn are reliable workers in almost any profession they undertake. They are the major finishers of most projects started by the ‘pioneering’ signs; with firm stick-to-it-ness they quickly become the backbone of any company they work for.

Capricorn make of themselves, resourceful, determined managers; setting high standards for themselves and others. They strive always for honesty in their criticism of self, they respect discipline from above and demand it from those beneath them. In their methodical, tough, stubborn, unyielding way, they persist against personal hardship, putting their families and/or their work before their own needs and welfare to reach their objectives long after others have given up and fallen by the wayside. In fact when practical ability allied with the drive of ambition are required in employees to make a project succeed, Capricorn are the people to hire. They plan carefully to fulfill their ambitions (which often include becoming wealthy), they are economical without meanness, and able to achieve great results with minimum effort and expense. Because of their organizing ability they are able to work on several projects simultaneously.

They have a great respect for authority but may not, if they reach high rank, be willing to listen to other opinions on things they are directly responsible for. As the ranking authority figure in a given situation they expect their underlings to be as self disciplined as they themselves are, and to perform every task undertaken to the highest standard.

They are, nevertheless, fair as well as demanding. Among their equals they are not always the most pleasant of work fellows for they are reserved and too conservative, valuing tradition more than innovation, however valuable the latter, and they are often humorless. There is also a tendency to pessimism, melancholy and even unhappiness which many Capricorn are unable to keep to themselves, especially if they fail personally. In the extreme this trait can make them a very depressed individual; ecstatic happiness alternating with the most wretched kind of misery which is so subconsciously buried that he or she should seek help if such emotions become frequent. For the above reason, capable Capricorn should spend many hours in meditation, gathering the strength to control such inner emotions.

The swings in mood are not the only reason some Capricorns deserve the adjective based on their name – capricious. They can be surprisingly and suddenly witty and subtle for the quiet, reserved individuals they seem to be, and they also have a tendency to ruin things by unexpected and utterly irresponsible bouts of flippancy. In certain individuals in whom the characteristic is strong, the temptation to do this has to be resisted with iron self-control. Another unexpected quality in some Capricorn is an interest in the occult which persists in spite of their naturally skeptical turn of mind.

Their intellects are sometimes very subtle. They think profoundly and deeply, throughly exploring all possibilities before deciding on a ‘safe’ alternative. They have good memories and an insatiable yet methodical desire for knowledge. They are rational, logical and clearheaded, have good concentration, delight in debate in which they can show off their cleverness by luring their adversaries into traps and confounding them with logic.

In their personal relationships they are often ill-at-ease, if not downright unhappy. They are somewhat self-centered but not excessively so, wary and cautious around people they do not know very well, preferring not to meddle with others and in turn not to allow interference with themselves, thus they tend to attract people who do not understand them. Casual acquaintances they will treat with diplomacy, tact and, above all, reticence. They make few good friends but are intensely loyal to those they do make, and they can become bitter, and powerful enemies. They sometimes dislike the opposite sex and test the waters of affection gingerly before judging the temperature right for marriage. Once married, however, they are faithful, though inclined to jealousy. Most Capricorns marry for life.

Their occupations can include most professions that have to do with math or money and they are strongly attracted to music. They can be economists, financiers, bankers, speculators, contractors, managers and real estate brokers. They excel as bureaucrats, especially where projects demanding long-term planning and working are concerned, and their skill in debate and love of dialectic make them good politicians. They are excellent teachers, especially as principals of educational establishments where they have the authority to manage and organize without too much intimacy with the staff members. If working with their hands, they can become practical scientists, engineers, farmers and builders. The wit and flippancy which is characteristic of certain Capricornians may make some turn to entertainment as a career.

Capricorn governs the knees, bones and skin, so its subjects may be liable to fractures and strains of the knees and other defects of the legs. Skin diseases from rashes and boils to leprosy (in countries where that disease is prevalent) are dangers, and digestive upsets may be caused by the tendency of Capricorns to worry or suppress emotions. Anemia, Bright’s disease, catarrh, deafness, rheumatism and rickets are also said to threaten the natives of this sign.

The beautiful Onyx is your starstone. Onyx is a type of agate (cryptocrystaline Quartz) that is recognized by the alternating, parallel bands of black and white. It is used for the carving of cameos, (a figure carved in the white layer which stands in relief against the black layer). If the white layer alternates with a different color then the agate is given different names: if red it’s carnelian-onyx, if brown it is sardonyx, and if the second layer is of the pale shades that characterizes common chalcedony it is called chalcedony-onyx. A solid piece of pure black Onyx is dyed. Agates are not always dyed black unless it is called Onyx, (Agate is frequently dyed red, green, blue, etc.)