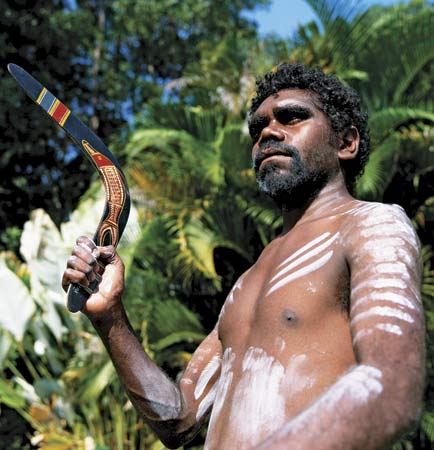 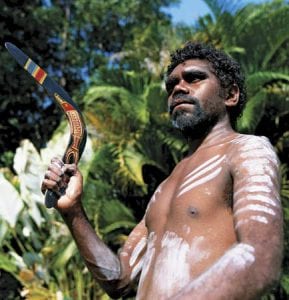 Aborigines first traveled to Australia about 40,000 years ago. At that time, there was a land bridge between Asia and Australia. Over the years, the sea levels rose and Australia became an island. The Aborigines numbered about 500,000 in 1788, and some 300 different Australian Aboriginal languages were spoken. Within a hundred years, their population declined to 50,000, mainly as a result of loss of land, adoption of European habits such as drinking alcohol, effects of European diseases, declining birthrates, and violence between the Europeans and Aborigines.

The English colonized the east coast and planned to convert the natives to Christianity from what they considered paganism and superstition. Because the Aborigines did not cultivate crops or domesticate animals apart from the dingo (a kind of wild dog), they were essentially nomadic hunter-gatherers. Then the missionaries arrived and, in 1821, the first Wesleyan Missionary Society established a presence, spreading throughout the land.

There was no cohesive element among the Aborigines, so they never came near an established organized national identity. While there was sporadic resistance against the colonists by various tribes, as the English called them, not much came of the efforts and evangelical Christianity became accepted. Today, more than two-thirds of Australian Aborigines are Christians.

Beliefs of the Aborigines

The colonists concluded that the Aborigines had no actual religion until they discovered something called Dreamtime. The thrust of the Aboriginal existence was their relationship with the environment andhanded down oral beliefs. Like all peoples, they asked themselves the universal questions: Who am I? Where did I come from? What am I doing here? Where do I go when I die?

Aborigines believed that when their heroic ancestors died, they went into a spiritual place where they created, through Dreamtime, everything that was: the earth, the land they occupied, every plant, animal, insect, and reptile, and the sky above. It was during Dreamtime that their creators made men and women. Birth was the result of what the creators did; their power was present at every birth, of people and everything else. In addition, some of the tribes believed that spirit children and spirit animals gained life by entering a female’s body.

The most important thing to an Aborigine was spiritual heritage. After death, the person’s spirit returned to its spirit place. That belief gave rise to burying a corpse facing the direction of its spirit home.

The creators taught men and women how to hunt and gather food, and how to make the tools to carry out those duties. As the generations came and went, the belief in Dreamtime was passed on by living a life known as Dreaming — by living in the same way as their forebears.

Puberty rituals for a boy generally took place once he had started to grow facial hair. When that happened, he was ready for the initial rituals. Initiation was a symbolic re-enactment of death and rebirth, seen as the way to a new life as an adult. The novice would leave his camp and the women would begin to wail. This symbolism was a prelude to the religious beliefs in which all men participated. Circumcision was an important part of the rites and was a secret sacred ritual. There were other rites, including piercing the nasal septum, pulling teeth, hair removal, scarring, and playing with fire.

The puberty of girls did not have a universal ritual; in some tribes, it was celebrated by either total or partial seclusion or taboos on certain foods. In some areas, defloration and hymen cutting were practiced.

Historically, the marriage ceremony involved the ritual of the man arriving in the camp of his wife-to-be and catching or hunting food, which he presented to his future father-in-law and other members of the family. The prospective wife would often build a new hut for her future husband and herself. She then prepared a meal for him, after which the couple was considered married. However, the ceremony was not a religious occasion.

There has been much research into whether or not the Aborigines actually had what could be called a true religion. The consensus was that for that to be established there must be evidence of a god. However, there was not even a suggestion of one in the Dreamtime myths. Then again, the definition that says a religion requires a god would also keep Buddhism from being a religion.

In modern times, Aborigines have had problems regarding land rights similar to those of the Native Americans; the Aboriginal people feel dispossessed. Dreamtime is still a part of their heritage, as is their landscape, which was formed by their ancestors and is still alive with their spirits. The Aborigines say that those spirits are as much a part of the land as they themselves are part of its creation.

Steps are being taken to find a just solution. Nevertheless, on Australia Day in January 2000, the words of reconciliation by Governor Sir James Gobbo did nothing to diminish the anger of a group of Aboriginal activists who labeled Australia Day a day of mourning; they burnt the Australian flag in protest.

In the late 1770s, Captain Cook said “… in reality the Aborigines are far happier than we Europeans, being wholly unacquainted with the superfluous conveniences so much sought after in Europe … they live in a tranquility which is not disturbed by the inequality of Condition.”

In 1992 a High Court ruling overturned terra nullius (the notion that Australia had been uninhabited when European colonization began), allowing Aborigines a measure of legal entitlement to their ancestral lands.