A Glossary Of Divination

Home A Glossary Of Divination 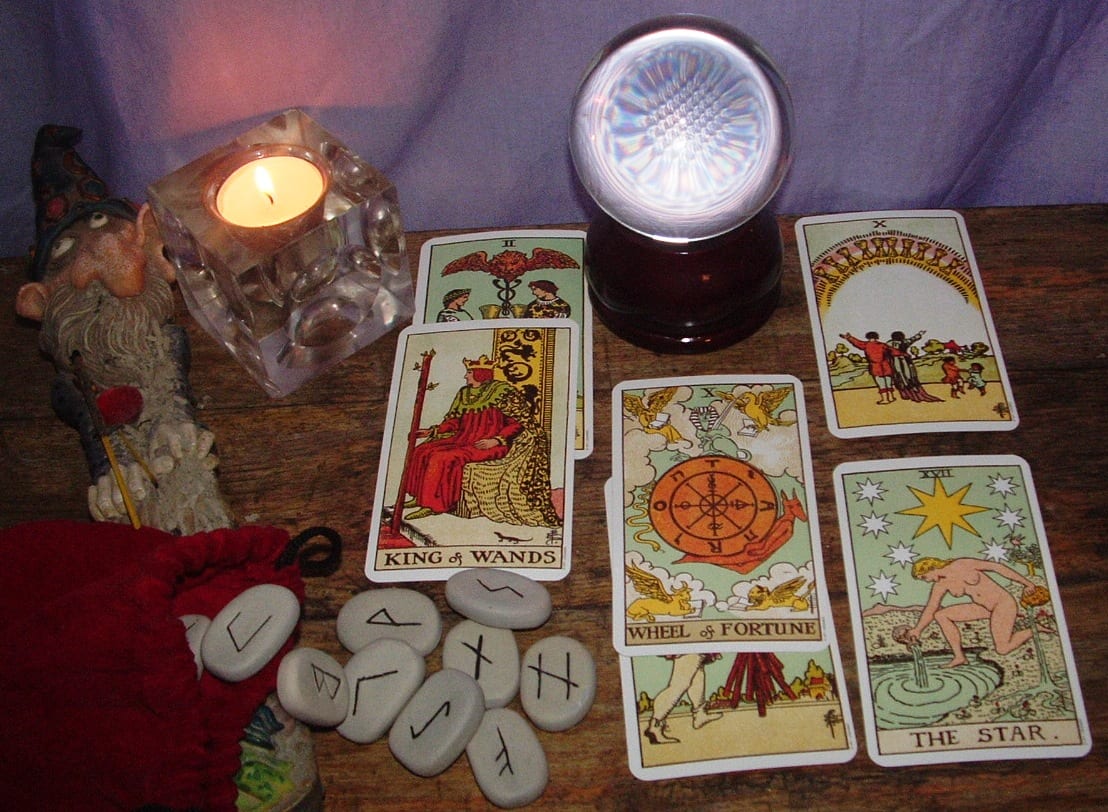 AEROMANCY divination from the air and sky, particularly concentrating on cloud shapes, comets, and other phenomena not normally visible in the heavens.

ALCHEMY is the practice of transmutation of base metals into precious metals (e.g., gold or silver) with the aid of an esoteric substance called the “philosopher’s stone”.

ALECTRYOMANCY is divination whereby a bird is allowed to pick corn grains from a circle of letters. A variation is to recite letters of the alphabet noting those at which a cock crows.

ALEUROMANCY is divination using “fortune cookies”; answers to questions are rolled into balls of dough and once baked are chosen at random.

ALOMANCY is divination by table salt.

ALPHITOMANCY uses special cakes that are digestible by persons with a clear conscience but are unpleasant to others.

ANTHROPOMANCY is the long-outlawed means of divination by human sacrifice.

APANTOMANCY is divination through chance meetings with animals (e.g., a black cat), birds, and other creatures. Mexico City is said to have been founded where Aztec soothsayers saw an eagle flying from a cactus carrying a live snake.

ARITHMANCY or ARITHMOMANCY is an earlier form of NUMEROLOGY where divination is made through numbers and the number value of letters.

ASTRAGLOMANCY or ASTRAGYROMANCY is a form of divination by dice where the faces of the dice bear numbers and letters.

AUGURY is the general term for the art of divination and is chiefly applied to interpretations of signs and omens.

AUSTROMANCY is divination by the study of the winds.

AXIOMANCY is divination through the observation of how an ax or hatchet quivers or points when driven into post.

BELOMANCY is an ancient form of divination performed by tossing or balancing arrows.

BOTANOMANCY is divination from burning tree branches and leaves.

BUMPOLOGY strictly a modern term, a popular nickname for PHRENOLOGY

CAPNOMANCY is the study of smoke rising from a fire.

CARTOMANCY is fortune telling using cards such as the Tarot.

CATOPTROMANCY is an early form of crystal gazing that utilizes a mirror turned to the moon to catch moonbeams.

CAUSIMOMANCY is divination from behavior of objects placed in a fire.

CEPHALOMANCY refers to divination with the skull or head of a donkey or goat.

CERAUNOSCOPY seeks to draw omens from the study of thunder and lightning.

CEROSCOPY, CEROMANCY is a form of fortune telling in which melted was is poured into cold water.

CHIROMANCY is divination from the lines on people’s hands.

CHIROGNOMY is the study of the general hand formation.

CLAIRAUDIENCE is “clear hearing” of divinatory information. Parapsychologist generally regard as a form of extrasensory perception.

CLAIRVOYANCE is “clear seeing” of divinatory information. Parapsychologist generally regard as a form of extrasensory perception.

CLEROMANCY is divination by “casting lots”, similar to dice but with objects such as pebbles or sea shells.

CRITOMANCY is the study of barley cakes.

CRYSTALLOMANCY is divination through crystal gazing.

CYCLOMANCY is the practice of divination from a turning wheel.

DACTYLOMANCY is an early form of RADIESTHESIA using a dangling ring.

DAPHNOMANCY requires one to listen to laurel branches crackling in an open fire.

DENDROMANCY is divination with either oak or mistletoe.

DOWSING or DIVINING RODS are methods of divination where a forked stick is used to locate water or precious minerals.

GASTROMANCY is an ancient form of ventriloquism whereby the voice is lowered to a sepulchral tone and prophetic utterances are delivered in a trance state.

GELOSCOPY is the divination from the tone of someone’s laughter.

GENETHLIALOGY is divination by the influence of the stars at birth.

GEOMANCY is the study of figures on the ground and the influence of the Earth’s “currents”.

GRAPHOLOGY is the analysis of character through handwriting.

GYROMANCY is a divination procedure where a person walks in a circle marked with letters until they become dizzy and stumble at different points, thus spelling out a prophesy.

HARUSPICATION is fortune-telling by means of inspecting the entrails of animals, as practiced by priests in ancient Rome.

HIEROMANCY or HIERSCOPY is divination by observing object of ancient sacrifice.

HIPPOMANCY is a form of divination from the stamping and neighing of horses.

HOROSCOPY is the practice of casting of astrological horoscopes.

HYDROMANCY is divination by water including the color, ebb and flow, or ripples produced by pebbles dropped in a pool.

LECANOMANCY uses a basin of water for divination.

LIBANOMANCY is the study of incense and its smoke.

MARGARITOMANCY is the procedure of using bouncing pearls.

METAGNOMY is the divination using “visions” received in a trance state.

METEOROMANCY is divination from meteors.

METOPOSCOPY is the reading of character using the lines if the forehead.

MOLEOSOPHY is the study of moles and indicators of a person’s character and future indications.

MOLYBDOMANCY draws mystic inferences from the hissing of molten lead.

MYOMANCY is the study of the prophetic meaning of behavior of rats and mice.

NUMEROLOGY is the numerical interpretation of numbers, dates, and the number value of letters.

OCULOMANCY is divination from a person’s eye.

ONEIROMANCY is the interpretation of dreams and their prophetic nature.

ONOMANCY is the study of the meaning of names.

ONOMANTICS is the application of ONOMANCY applied to personal names, particularly in the sense of occult interpretation.

ONYCHOMANCY is the study of fingernails.

OOMANTIA and OOSCOPY is the method of divination by eggs.

OPHIOMANCY is divination from serpents.

ORNISCOPY and ORINITHOMANCY is the study of omens associated with birds, particularly birds in flight. see APANTOMANCY

OVOMANCY is another type of egg divination.

PALMISTRY is the broad field of divination and interpretation of the lines and structure of the hand.

PEGOMANCY concerns itself with spring water and bubbling fountains and the omens contained therein.

PHRENOLOGY is the long practiced study of head formations.

PHYLLORHODOMANCY is a means of divination whereby one slaps a rose petal against the hand and judges the favorability of the omen by the loudness of the sound.

PHYSIOGNOMY is the study of character analysis through physical features.

PRECOGNITION in an inner knowledge or sense of future events.

PSYCHOGRAPHY is a form of mysterious writing having a divinatory nature.

PSYCHOMETRY is the faculty of gaining impressions from a physical object and its history.

PYROMANCY and PYROSCOPY are forms of divination by fire or flame, often assisted by substances thrown onto the flames.

RADIESTHESIA is the general term for divination using a device such as a divining rod or pendulum. Other forms include “table tipping” which was practiced at the White House in the 19th century, the Ouija board, automatic writing (or superconscious writing), and scrying.

RHABDOMANCY is divination using a stick or wand. These methods were forerunners of the divining rod.

RHAPSODOMANCY is a means of divination using a book of poetry whereby the book is opened at random and a passage read.

SCIOMANCY is divination using a spirit guide, a method generally employed by channelers.

SCRYING is a general term for divination using a crystal, mirrors, bowls of water, ink, or flames to induce visions.

SIDEROMANCY is the burning of straws with a hot iron, the resulting figures having divinatory properties.

SORTILEGE is the casting of lots and the assessment of omens indicated.

STICHOMANCY is another form of throwing open a book and selecting a random passage for the purpose of divination.

SYCOMANCY is performed by writing messages on tree leaves; the slower they dry, the more favorable the omen. A modern variation is to write on slips of paper (always including one blank) and rolling them up. They are then held in a strainer over a boiling pot; the first to unroll will be answered.

TASSEOGRAPHY is the reading of tea leaves that remain in a tea cup once the beverage has been drunk.

TEPHRAMANCY is divination by ashes obtained from the burning of tree bark.

TIROMANCY is a type of divination using cheese.

XYLOMANCY is divination from pieces of wood, either from their shape when collected or their appearance while burning.